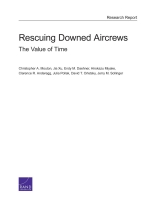 The Value of Time

Recovering downed airmen is a critical task for the U.S. Air Force, which devotes considerable resources — including personnel, equipment, and training — to ensure that it can carry out this task. In light of the impending drawdown of forces and the pressure to reduce defense budgets, the Air Force has been reassessing its personnel recovery (PR) force structure, along with other organizational aspects. It asked RAND Project AIR FORCE to assist in this reassessment with an examination of the operational risk associated with Air Force PR. Specifically, the Air Force sought "to refine the metric used to assess PR's operational risk, [which] is the degree of likelihood of mission success."

To this end, the research described here quantifies the "rescuability window" of downed aircrews. The current research quantifies the relationship between rescuability and time so that the most cost-effective options for increasing the rescuability of downed personnel can be pursued. The implications of the findings are also summarized in this report.

The "Rescuability Timeline" Can Be Divided into Three Distinct Temporal Regions That Correspond to Aircrew Survivability After a Downing Event.