In a multimethod analysis, RAND researchers assess whether the military should continue using its 40-year pay table, implemented in 2007, to retain the most-experienced officers, warrant officers, and enlisted personnel, as well as more-junior personnel aspiring to higher ranks. Alternatively, could such retention be equally achieved by reverting to a 30-year pay table, and how much special and incentive pay would be required? 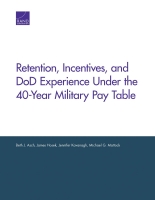 In 2007, Congress extended the military's basic pay tables to 40 years to provide an incentive for the most-experienced members to continue to serve. In 2015, the Senate Armed Services Committee requested that the U.S. Department of Defense review the 40-year pay table and report on whether it is still necessary for retaining experienced personnel or whether such retention could be equally achieved with a 30-year pay table. RAND researchers were asked to assist in this review, and this report documents their analysis. Using a multimethod approach, including semistructured interviews and RAND's Dynamic Retention Model, researchers found that while both a 40-year and 30-year table could be equally effective in sustaining retention (as long as the services would have adequate special pay to manage retention under a 30-year table), continuing with the 40-year table is preferred. It performs well, and its financial cost is relatively small; in contrast, reverting to the 30-year table could adversely affect morale and perceptions about the stability and value of military compensation overall.

Support for Continuing the 40-Year Table

This research was sponsored by the Office of the Under Secretary of Defense for Personnel and Readiness and conducted within the Forces and Resources Policy Center of the RAND National Defense Research Institute, a federally funded research and development center sponsored by the Office of the Secretary of Defense, the Joint Staff, the Unified Combatant Commands, the Navy, the Marine Corps, the defense agencies, and the defense Intelligence Community.