A key finding of previous RAND research on insurgencies worldwide since World War II was that an overall score on a scorecard of 15 equally weighted good and 11 equally weighted bad counterinsurgency factors and practices distinguished conflicts' historical outcomes. Using the scorecard approach and an expert elicitation exercise, a RAND study sought to extend the findings to the case of Afghanistan in 2015. 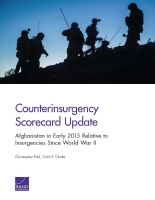 Afghanistan in Early 2015 Relative to Insurgencies Since World War II

Previous RAND research examined 71 insurgencies begun and completed worldwide between World War II and 2010 to analyze correlates of success in counterinsurgency (COIN). A key finding was that a case's score on a scorecard of 15 equally weighted good and 11 equally weighted bad COIN factors and practices corresponded perfectly with the outcomes of the cases analyzed. That is, the balance of good and bad factors and practices was always positive when the outcome was a COIN win (insurgent loss) and always negative when the outcome was a COIN loss (insurgent win). Using the scorecard approach as its foundation, a RAND study sought to apply the findings to the case of Afghanistan in 2015. The effort involved an expert elicitation in which experts were asked to make "worst-case" assessments of the factors to complete the scorecard for ongoing operations in Afghanistan. It was the third Afghanistan-focused exercise conducted with the scorecard, allowing rough comparisons with scores assigned by expert panels in 2011 and 2013. The 2015 consensus results indicated that Afghanistan continues to have a positive score, though its score is tied with the lowest-scoring historical wins. Two factors remained absent in Afghanistan in 2015 but essential to success in historical COIN campaigns: disrupting flows of tangible support to the insurgents and a demonstration (and improvement) of commitment and motivation on the part of the Afghan National Security Forces, the primary COIN force since the coalition drawdown. Despite some potentially positive developments resulting from the 2014 election of a new government in Afghanistan, it appears that the most promising end to the conflict will be a negotiated settlement in which the Afghan government makes some concessions to the insurgents and in which external powers, including the United States and Pakistan, help broker a satisfactory power-sharing agreement that brings greater stability to the country.

Although Afghanistan in 2015 Scored Among Historical COIN Winners in an Expert Elicitation Exercise, There Were Notable and Persistent Shortfalls

This research was conducted within the International Security and Defense Policy Center of the RAND National Defense Research Institute.