The Bureau of Justice Assistance (BJA) created the State and Local Anti-Terrorism Training (SLATT) Program in 1996 to provide specialized counterterrorism training to state, local, and tribal law enforcement personnel. This report assesses the nature and value of the SLATT Program and provides suggestions for improving it. 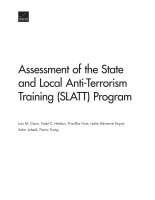 Assessment of the State and Local Anti-Terrorism Training (SLATT) Program

The Bureau of Justice Assistance (BJA) created the State and Local Anti-Terrorism Training (SLATT) Program in 1996 to provide counterterrorism training to state, local, and tribal law enforcement personnel. The authors of this report assess the nature and value of the SLATT Program.

The authors reviewed the current terrorism threat, both foreign and domestic, to gauge the need for the type of training that SLATT provides; examined how SLATT training is planned and operates; conducted a survey of participants of five SLATT investigative/intelligence workshops and train-the-trainer workshops; and conducted an analysis of the costs and benefits of SLATT to training participants based on results of a choice experiment that was part of the survey to identify what program features participants valued most. The authors conclude with suggestions for improving BJA's SLATT Program.

Assessment of Costs of SLATT to Law Enforcement Participants

Assessing Features and the Value of SLATT to Participants

The research described in this report was conducted by the Justice Policy Program within RAND Justice, Infrastructure, and Environment.