American Muslims have played an important role in helping to counter extremism and are increasingly using social media to this end. RAND researchers reviewed literature and interviewed American Muslims experienced in social media to understand and explain key challenges facing these Muslim activists, and to identify ways in which the public and private sector can help empower these voices online. 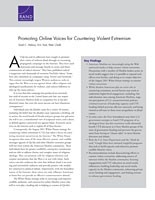 American Muslims have played an important role in helping to counter violent extremism (CVE) and support for al-Qa'ida, and are increasingly using the Internet and social media to these ends. Discussions with a number of Muslim leaders active in social media suggest that it is possible to expand such efforts even further, and doing so is a major objective of the August 2011 White House strategy to counter violent extremism. RAND researchers reviewed literature and interviewed American Muslims experienced in social media to understand and explain key challenges facing Muslim activists against extremism, and to identify ways in which the public and private sector can help empower CVE voices online. Their recommendations include reducing the national security focus of CVE where possible: addressing sources of mistrust within the Muslim community, focusing engagement and education on those influential in social media, and enhancing both government and private-sector funding and engagement.

Outside Influences Must Be Facilitators, Not Orchestrators

This research was conducted within the RAND Homeland Security and Defense Center, a joint center of RAND Justice, Infrastructure, and Environment and the RAND National Defense Research Institute, a federally funded research and development center sponsored by the Office of the Secretary of Defense, the Joint Staff, the Unified Combatant Commands, the Navy, the Marine Corps, the defense agencies, and the defense Intelligence Community.