This report examines the ongoing debate about the Islamic State in Iraq and Syria (ISIS) on Arabic Twitter to better understand the Twitter networks of ISIS supporters and opponents, using a mixed-methods analytic approach to identify and characterize in detail both support and opposition networks. The authors draw on community detection algorithms, lexical analysis to identify key themes and content, and social network analysis. 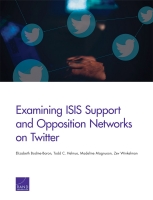 The Islamic State in Iraq and Syria (ISIS), like no other terrorist organization before, has used Twitter and other social media channels to broadcast its message, inspire followers, and recruit new fighters. Though much less heralded, ISIS opponents have also taken to Twitter to castigate the ISIS message. This report draws on publicly available Twitter data to examine this ongoing debate about ISIS on Arabic Twitter and to better understand the networks of ISIS supporters and opponents on Twitter. To support the countermessaging effort and to more deeply understand ISIS supporters and opponents, this study uses a mixed-methods analytic approach to identify and characterize in detail both ISIS support and opposition networks on Twitter. This analytic approach draws on community detection algorithms that help detect interactive communities of Twitter users, lexical analysis that can identify key themes and content for large data sets, and social network analysis.

During the Study Period, ISIS Opponents Generally Outnumber Supporters Six to One

Patterns of Connection Among the Metacommunities Suggest Inroads for Influence

The research described in this report was conducted within the RAND National Security Research Division (NSRD) of the RAND Corporation.