This report summarizes Army deployment statistics to Iraq and Afghanistan through December 2011. It serves as an update to the 2008 report Army Deployments to OIF and OEF (DB-587-A). 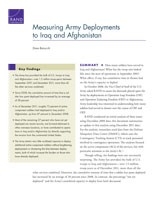 In October 2008, Army leadership asked the RAND Arroyo Center to assess the demands placed upon the Army by deployments to Iraq and Afghanistan. The resulting analysis (documented in Army Deployments to OIF and OEF, DB-587-A) found that the Army had provided over 1 million troop-years to Operation Enduring Freedom (OEF) and Operation Iraqi Freedom (OIF). In addition, most active-duty soldiers deploying to these operations were on their second or third tour.

This report serves as an update to the original documented briefing. The Army has now provided more than 1.5 million troop-years to OEF and OIF/Operation New Dawn. There have also been two noteworthy trends since the original study: From December 2008 to December 2011, the cumulative amount of time that a soldier has spent deployed has increased (on average) by 28 percent, and the fraction of active-duty soldiers who have not yet deployed has decreased, from 33 percent to 27 percent.

This work was performed as a direct-support effort by RAND Arroyo Center to the Office of the Vice Chief of Staff, U.S. Army, and to the Army Quadrennial Defense Review (QDR) Office and conducted within the RAND Arroyo Center's Manpower and Training Program. RAND Arroyo Center, part of the RAND Corporation, is a federally funded research and development center sponsored by the United States Army.