Russia enjoyed a decade of rapid economic growth between 1999 and 2008. Following a recession in 2009, Russia recovered slowly until the end of 2014, when a drop in the price of oil, a depreciation in the ruble, Western sanctions, and a loss of investor confidence led to another downturn. This report takes stock of the medium-term outlook for the Russian economy in light of these factors and given the underlying business environment in Russia. 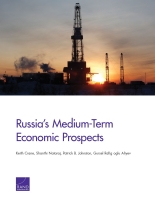 Russia enjoyed a decade of rapid economic growth between 1999 and 2008. Following a recession in 2009, Russia recovered slowly until the end of 2014. In 2015, Russia fell into another downturn, primarily caused by the sharp fall in the price of oil; the ensuing depreciation of the ruble and corresponding increases in inflation; rising policy barriers to private economic activity; a loss of investor confidence stemming from Putin's economic, political, and foreign policies; and Western sanctions on key parts of the Russian financial and energy sectors. This report takes stock of the medium-term outlook for the Russian economy. It finds that, without major policy changes, the Russian economy will grow slowly in the medium term, even if world market prices for oil rebound sharply by the end of the decade. However, there is much that the Russian government could do internally to accelerate growth. A combination of an aggressive program to privatize state-owned assets, clamping down on corruption, and improving the business environment should accelerate growth in total factor productivity.

A Variety of Factors Fed into the Current Russian Recession

A Modest Uptick Might Occur in 2016, but Growth Will Require Addressing the Factors That Led to the Recession