The Abilities of the British, French, and German Armies to Generate and Sustain Armored Brigades in the Baltics 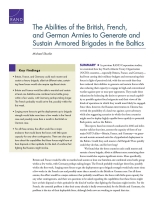 Britain, France, and Germany had been cutting military budgets, until the Russian intervention in Ukraine revived the possibility of a land war against a peer adversary. This report, based on research conducted in 2016 and information valid at that time, assesses the current capacity of Britain, France, and Germany to generate armored units for a hypothetical deployment to the Baltics. Could they muster a full brigade each? How quickly could they do that, and for how long could they sustain the units?

The author found that the three countries could muster and sustain a heavy brigade each, albeit at different rates; sustaining these forces would require significant strain. More specifically, Britain and France would be able to marshal and sustain at least one battalion-size combined arms battle group within a few weeks, with Germany perhaps taking longer. The French probably would arrive first, possibly within the first week. Surging more forces to get the deployments up to brigade strength would take more time: a few weeks in the French case and possibly more than a month in the British or German case. For all three armies, the effort would be a major endeavor that would leave the forces with little spare capacity for any other contingencies, and there are questions about the capabilities that those forces might have at their disposal or their aptitude for the kind of warfare that fighting the Russians might involve. For the French, the problem is that their army already is badly overstretched; for the British and Germans, the problem is the size of their deployable force, although both are now working to expand.