Working Conditions in the United States 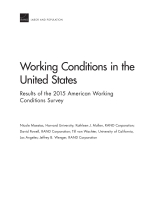 This report introduces the American Working Conditions Survey (AWCS), a survey of individuals designed to collect detailed information on a broad range of working conditions in the American workplace. The AWCS was fielded in 2015 on the RAND American Life Panel, a nationally representative (when weighted) sample of individuals residing in the United States who have agreed to participate in regular online surveys. This report presents detailed findings about the prevalence and distribution of working conditions across the American workforce by age, gender, and education.

The AWCS findings indicate that the American workplace is very physically and emotionally taxing, both for workers themselves and their families. Most Americans (two-thirds) frequently work at high speeds or under tight deadlines, and one in four perceives that they have too little time to do their job. More than one-half of Americans report exposure to unpleasant and potentially hazardous working conditions, and nearly one in five American workers are exposed to a hostile or threatening social environment at work. Positive findings include that workers appear to have a certain degree of autonomy, most feel confident about their skill set, and many receive social support on the job. Four out of five American workers report that their job met at least one definition of "meaningful" always or most of the time.