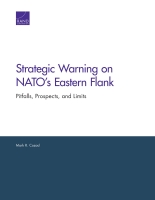 Since 2008, Russia's military has embarked on an extensive modernization program designed to overcome shortfalls in readiness, competence, sustainability, and deployability. These and changes in logistics and operational capability have raised concerns about the Intelligence Community's (IC's) ability to warn of future Russian aggression. Achieving timely warning has proven extremely difficult, for a variety of reasons, in large part because of a lack of insight into Russian leadership intentions. This study examines six Soviet and Russian events that occurred in the past 50 years to highlight themes that pertain to current concerns about aggression on NATO's eastern flank. It addresses developments that have shaped warning since the fall of the Soviet Union and the beginning of Russia's military modernization efforts, including a decline in Russia's priority for U.S. policymakers and the IC effort devoted to it. It identifies continuity in Russian operational practices and IC challenges and distills the findings into recommendations for improving warning, including increasing analytic effort to improve the IC's current indicators, developing better understanding of key civil-military processes and functions necessary for transitioning to war, and rebuilding the experience and expertise on Russia the IC has lost over the past two decades.