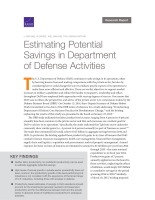 There has been and continues to be a push to make the U.S. government "run more like a business." This desire is predicated on the assumption that businesses generally operate more efficiently and productively than government agencies; therefore, by adopting businesslike modes of operation, government functions will cost less and be less of a burden to taxpayers. This push extends to the U.S. Department of Defense (DoD), which continues to commission studies of how much it might save (and how) given experiences in the private sector. In two studies, increased productivity applied across the board to both labor and nonlabor costs was estimated to yield savings totaling as much as $125 billion over five years. While these studies are aspirational and help identify ideas that could yield savings for DoD, the authors of this report found that the productivity assumptions on which their estimates were based do not account for a number of important effects. Thus, DoD may overstate savings that can be achieved in the near term.

The authors found that alternative approaches to productivity-based estimates that take DoD's complexity and unique mission-driven needs into consideration would produce more-feasible estimates of potential savings. While savings — perhaps substantial — in defense activities may be possible to achieve, estimates of their size should be based on identifying and removing specific barriers as a way to increase effectiveness and efficiency in specific aspects of defense operations.