Russia has historically succeeded in using various hostile measures to sow disorder, weaken democratic institutions, and undermine Western alliances. However, it also has a long track record of strategic shortfalls and even ineptitude. Exploring opportunities to deter, prevent, and counter Russian hostile behavior will benefit NATO and other Western powers in the so-called gray zone short of war, as well as in a conventional warfare scenario. 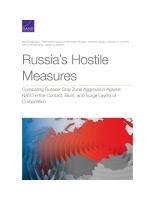