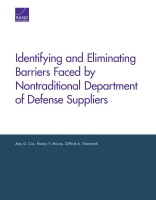 The report seeks to identify barriers that companies face when attempting to enter into contracts with the Department of Defense (DoD), especially when they are not traditional DoD suppliers. To learn more about barriers, the authors interviewed personnel in companies that are in industries of likely interest to DoD and interviewed DoD personnel who work with suppliers. The interviews revealed some shared experiences that reportedly made some suppliers less willing to bid on DoD contracts: lack of access to and communication from DoD; DoD's complex and inefficient bid and selection process; the extra work and delays entailed in DoD's administration and management of contracts; and the lengthy funding time line and delays in final payments. DoD personnel interviewed had different perceptions, although they did confirm the existence of some barriers.

Another Barrier Is DoD's Limited Communication with Potential or Actual Bidders

In the short term:

In the longer term:

This research was sponsored by the DoD Office of Small Business Programs and conducted within the Acquisition and Technology Policy Center of the RAND National Defense Research Institute, a federally funded research and development center sponsored by the Office of the Secretary of Defense, the Joint Staff, the Unified Combatant Commands, the Department of the Navy, the Marine Corps, the defense agencies, and the defense Intelligence Community.