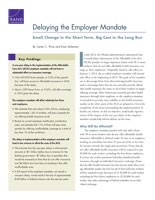 Small Change in the Short Term, Big Cost in the Long Run

In July 2013, the Obama administration announced a one-year delay in enforcement of the Affordable Care Act's (ACA) penalty on large employers that do not offer affordable health insurance coverage. To help policymakers understand the implications of this decision, RAND analysts employed the COMPARE microsimulation model to gauge the impact of the one-year delay of the so-called employer mandate. They found that the delay will not have a large impact on insurance coverage: Because relatively few firms and employees are affected, only 300,000 fewer people, or 0.2% of the population, will have access to insurance from their employer, and nearly all of these will get insurance from another source. However, a one-year delay in implementation of the mandate will result in $11 billion dollars less in federal inflows from employer penalties for that year. A full repeal of the employer mandate would cause revenue to fall by $149 billion over the next ten years (10% of the ACA's spending offsets), providing substantially less money to pay for other components of the law. The bottom line: The one-year delay in the employer mandate will have relatively few consequences, primarily resulting in a relatively small one-year drop in revenue; however, a complete elimination of the mandate would have a large cumulative net cost, potentially removing a nontrivial revenue source that in turn funds the coverage provisions in the ACA.

The Employer Mandate Will Affect Relatively Few Firms and Employees

The research was conducted in RAND Health, a division of the RAND Corporation.