Multiple factors should influence decisions about the mix of Army active and reserve component forces, including the capabilities that these forces provide and their respective costs. This report focuses on two critical aspects of capability and cost: (1) the time needed to make forces ready to deploy in a crisis and (2) the costs of active and reserve component forces to sustain the same level of deployed output for rotational missions. 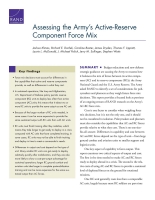 New defense strategic guidance and budget reductions as the United States draws down its forces in Afghanistan have led the Army to reassess how it balances the mix of forces between its active component (AC) and its two reserve components (RCs), the Army National Guard and the U.S. Army Reserve. Multiple factors should influence AC-RC force mix decisions, including the capabilities that AC and RC forces provide and their cost. This report describes analyses from an ongoing stream of RAND research on the Army's AC-RC force mix. It focuses on two critical aspects of capabilities and cost: (1) the time needed to make forces ready to deploy abroad in a crisis and (2) the costs of AC and RC forces to sustain the same level of deployed output for rotational missions. It finds that the factors that make RC units cost less than AC units, on average, can also make them less rapidly deployable in the event of unexpected contingencies — namely in terms of the amount of time personnel are available to train. The report also identifies the circumstances under which either AC or RC forces can sustain a given level of deployed output at a lower cost. Finally, it shows that differences in capabilities and cost depend of the type of unit. For example, many smaller support and logistics units tend to have an advantage in the RC, while some larger ground combat and aviation units have an advantage in the AC. Policymakers should consider both capability and cost as they weigh AC-RC force mix decisions.

Force Mix Decisions Must Account for Differences in the Capabilities That Active and Reserve Components Provide, as Well as Differences in What They Cost