The authors focus on the Iran Threat Network (ITN), a loose network of non-Iranian, nonstate groups supported by Tehran that sits at the intersection of two threats—Iran and nonstate actors—highlighted in recent U.S. policy as a priority for the U.S. government to counter. The authors explore Iran's relationship with its nonstate network to better enable the U.S. government to counter Iranian subversion in the region via the ITN. 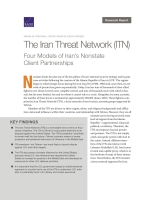 The Iran Threat Network (ITN) is a formidable force made up of tens of thousands of fighters. It spreads across the Middle East and South Asia and has ties to and influence in Africa and Latin America. The ITN affords Iran the ability to have a presence and project power throughout the region, and to deter and harass its adversaries. The network consists of diverse and disparate groups, which is reflected in the nature and amount of support provided and the level of command and control exerted by Tehran over each group. These differences allow Iran to employ the ITN to achieve four buckets of political and military objectives.

The authors focus on the ITN, which sits at the intersection of two threats—Iran and nonstate actors—highlighted in the 2018 U.S. National Defense Strategy and the 2017 U.S. National Security Strategy as a priority for the U.S. government to counter. In this report, the authors assess several indicators of Iran-ITN relations to offer an overview of the nature, depth, and breadth of Iran's relationship with these key nonstate partners classified by Iranian objectives.

Iran's further expansion of the ITN would increase its ability to use the network to undermine stability in the region, antagonize U.S. allies and partners, undercut U.S. influence, and pose a risk to U.S. military personnel. In light of this expansion, this study explores Iran's relationships with its nonstate network to better enable the U.S. government to counter Iranian subversion in the region via the ITN.

The research described in this report was sponsored by the United States Army and conducted by the Strategy, Doctrine, and Resources Program within RAND Arroyo Center.