Russia is expanding its presence in Africa. U.S. Air Forces Africa (AFAFRICA) has lacked an overall geostrategic picture of this activity and what it means for the command's objectives in the region. This report presents an empirically rigorous description of where Russia is involved in Africa, where it is most likely to become engaged in the future, and what implications this might have for AFAFRICA's regional strategy. 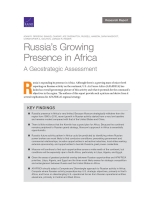 Moscow is expanding the scope and scale of its involvement in Africa. However, the future direction of that involvement has been difficult to predict because Moscow's strategic approach is essentially opportunistic. Although there is ample reporting on certain aspects of this expansion, U.S. Air Forces Africa (AFAFRICA) has lacked an integrated geostrategic picture of the phenomenon and what it means for the command's objectives in the region.

Traditional deductive assessments of Russian behavior, based on national interest and bureaucratic politics, offer limited insight into opportunistic Russian behavior in such tertiary theaters as Africa. Therefore, a different assessment approach was required. Employing innovative geospatial visualization techniques, RAND researchers assembled an empirically rigorous description of where Russia is involved on the continent, where it is most likely to become engaged in the future, and what implications this might have for AFAFRICA's regional strategy. This geostrategic assessment of Russian activity in Africa will help AFAFRICA make sense of the growing mass of often contradictory micro-level reporting on Russian involvement on the continent.

The research reported here was commissioned by U.S. Air Force in Europe — AFAFRICA and conducted within the Strategy and Doctrine Program of RAND Project AIR FORCE.