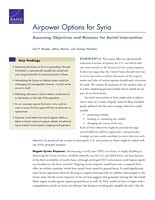 As the Syrian civil war drags into its third year with mounting casualties and misery among the civilian population, and the large-scale use of chemical weapons, interest in the possibility of military intervention by the United States and its allies is growing despite U.S. wariness of becoming involved in a prolonged sectarian quagmire. Without presuming that military intervention is the right course, this report considers the goals an intervention relying on airpower alone might pursue and examines the requirements, military potential, and risks of five principal missions that intervening air forces might be called on to carry out: negating Syrian airpower, neutralizing Syrian air defenses, defending safe areas, enabling opposition forces to defeat the regime, and preventing the use of Syrian chemical weapons. It finds that (1) destroying the Syrian air force or grounding it through intimidation is operationally feasible but would have only marginal benefits for protecting Syrian civilians; (2) neutralizing the Syrian air defense system would be challenging but manageable, but it would not be an end in itself; (3) making safe areas in Syria reasonably secure would depend primarily on the presence of ground forces able and willing to fend off attacks, and defending safe areas not along Syria’s borders would approximate intervention on the side of the opposition; (4) an aerial intervention against the Syrian government and armed forces could do more to help ensure that the Syrian regime would fall than to determine what would replace it; and (5) while airpower could be used to reduce the Assad regime’s ability or desire to launch large-scale chemical attacks, eliminating its chemical weapon arsenal would require a large ground operation. Any of these actions would involve substantial risks of escalation by third parties, or could lead to greater U.S. military involvement in Syria.

There are three main strategic objectives an aerial intervention in Syria could include:

In pursuit of these strategic objectives, there are five principal missions the U.S. and partner air forces might be called on to carry out, each of which would present certain challenges and benefits.

This research was supported through philanthropic contributions and conducted within the RAND Center for Middle East Public Policy (CMEPP), part of International Programs at the RAND Corporation