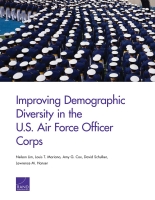 Despite the Air Force's efforts to create a force that mirrors the racial, ethnic, and gender differences of the nation's population, minority groups and women are underrepresented in the active-duty line officer population, especially at senior levels (i.e., colonel and above). This report examines the reasons for this, with the goal of identifying potential policy responses.

The authors analyzed data from multiple sources on Air Force eligibility, youths' intention to serve, accessions, retention, and promotion. A key finding is that African Americans and Hispanics are underrepresented in the Air Force compared with the nation's population mainly because they meet Air Force officer eligibility requirements at lower rates (e.g., they are much less likely than whites to have a college degree). Another reason for lower representation of minorities and women among senior leaders is that, once in the military, women and minorities are less likely to choose career fields that give them the highest potential to become senior leaders. In addition, female officers have lower retention rates than male officers, and the reasons for this are not clear. Finally, the authors comprehensively examined the Air Force promotion system and found no evidence to suggest it treats women and minorities differently than white men with similar records. The authors recommend that the Air Force should seek comparable quality across ethnic/minority groups in the accession processes, since competitiveness even at this stage is a predictor of promotion success. More racial/ethnic minorities and women who are cadets and officers should be in rated career fields, which have the highest promotion rates to the senior ranks.

Levels of Racial/Ethnic and Gender Diversity Among Air Force Officers

Factors That Explain Differences in the Representation of Racial/Ethnic Minorities and Women Among Air Force Officers: Eligibility, Accessions, Retention, and Promotion