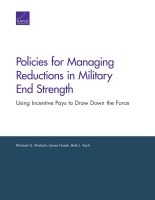 Using Incentive Pays to Draw Down the Force

Office of the Secretary of Defense Cost Assessment and Program Evaluation requested RAND National Defense Research Institute help in developing an efficient means of decreasing force size. The researchers proposed the use of voluntary separation pay (VSP) and showed how it can be designed to meet drawdown goals within a certain time frame without over- or undershooting the goals. RAND's dynamic retention model determined the appropriate VSP levels by year of service to achieve drawdowns of alternative sizes for the active component Army, and the approach could be applied to other services. The analysis was done for enlisted personnel and officers and for the steady state and the transition to it.

The analysis suggests that VSPs can draw down the force rapidly without creating a hollow force or bathtub. Implementing VSPs requires an increase in outlays, but net decreases in personnel costs can still be realized even if selected military occupational specialties are cut deeply. The net decrease in personnel cost is less if a VSP is offered for multiple years, if members anticipate that a VSP will be offered in a future year, or if deeper cuts are made to portions of the force versus a shallower across-the-board cut. For a 10-percent cut in the force, net decreases range from $6.4 billion to $7.4 billion in 2013 dollars over the first ten years. The Army would initially require $1.7 billion to $3 billion to implement VSPs for such a cut, depending on how it is done.

This research was sponsored by Cost Assessment and Program Evaluation in the Office of the Secretary of Defense and conducted within the Forces and Resources Policy Center of the RAND National Defense Research Institute, a federally funded research and development center sponsored by the Office of the Secretary of Defense, the Joint Staff, the Unified Combatant Commands, the Navy, the Marine Corps, the defense agencies, and the defense Intelligence Community.