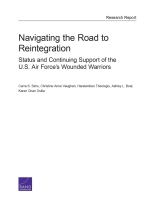 Navigating the Road to Reintegration

The U.S. Air Force, wanting to gain greater insight into the well-being of its members who have sustained mental or physical injuries in combat or combat-related situations, including their quality of life and the challenges they will confront in their reintegration following separation or retirement, asked the RAND Corporation for assistance in gauging the current status of the Air Force's wounded warriors, including their use of and satisfaction with Air Force programs designed to serve them. This report presents the baseline findings from a longitudinal analysis of enrollees in the Air Force Wounded Warrior (AFW2) program who were receiving benefits or undergoing evaluation to receive benefits, the majority of whom had a primary administrative diagnosis of post-traumatic stress disorder (PTSD). A high proportion of the Airmen in the sample screened positive for PTSD (roughly 78 percent) and major depressive disorder (MDD) (roughly 75 percent); 69 percent screened positive for both. Although more than 90 percent of those in the sample who screened positive for PTSD or MDD were receiving treatment, about half indicated that there was at least one instance during the past year in which they desired mental health treatment but did not receive it. Participants reported concerns about stigma, confidentiality, and the quality of available treatment as barriers to receiving mental health care, though the current data do not link these concerns to a particular treatment setting. About 10 percent of Airmen reported a financial situation that could be considered as living in poverty based on U.S. Department of Health and Human Services' poverty guidelines. Similarly, close to 15 percent of those in the labor force could be considered unemployed. Reserve and National Guard Airmen evidenced heightened challenges across examined domains. Respondents were overall satisfied with the services they received from the AFW2 and Air Force Recovery Care Coordinator programs.

Airmen Are Indeed Experiencing Challenges in a Number of Domains

The research reported here was commissioned by the Assistant Secretary of the Air Force for Manpower and Reserve Affairs (SAF/MR); the Director, Air Force Directorate of Services (AF/A1S); and the Air Force Surgeon General (AF/SG). The analysis was conducted within the Manpower, Personnel, and Training Program of RAND Project AIR FORCE.