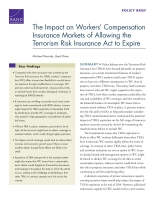 Congress enacted the Terrorism Risk Insurance Act (TRIA) in 2002, in response to terrorism insurance becoming unavailable or, when offered, extremely costly in the wake of the 9/11 attacks. The law provides a government reinsurance backstop in the case of a terrorist attack by providing mechanisms for avoiding an immediate drawdown of capital for insured losses or possibly covering the most extreme losses. Extended first in 2005 and again in 2007, TRIA is set to expire at the end of 2014, and Congress is again reconsidering the appropriate government role in terrorism insurance markets.

This policy brief examines how markets for workers' compensation (WC) insurance would be affected if TRIA were to expire. They explain that TRIA expiration would affect WC insurance markets differently from other insurance markets because WC statutes rigidly define the terms of coverage, such that in a post-TRIA world insurance companies would limit their terrorism risk exposure by declining coverage to employers facing high terrorism risk. Because WC coverage is mandatory for nearly all U.S. employers, employers that cannot purchase coverage would be forced to obtain coverage in markets of last resort. Migration of terrorism risk to these markets of last resort would increase the likelihood that WC losses from a catastrophic terror attack would largely be financed by businesses and taxpayers throughout the state in which the attack occurs, adding to the challenge of rebuilding in that state. TRIA, in contrast, spreads such risk across the country.

This work was conducted within the Center for Catastrophic Risk Management and Compensation. The center is part of RAND Justice, Infrastructure, and Environment, a division of the RAND.