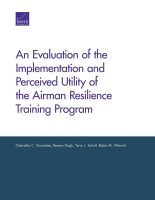 Since 2001, the U.S. military has been functioning at an operational tempo that is historically high for the all-volunteer force in which service members are deploying for extended periods on a repeated basis. Even with the drawdown of troops from Iraq in 2011, some service members are returning from deployment experiencing difficulties handling stress, mental health problems, or deficits caused by a traumatic brain injury (TBI). In response to these challenges, the U.S. Department of Defense (DoD) has implemented numerous programs to support service members and their families in these areas. In 2009, the Assistant Secretary of Defense for Health Affairs asked the RAND National Defense Research Institute to develop a comprehensive catalog of existing programs sponsored or funded by DoD to support psychological health and care for TBI, to create tools to support ongoing assessment and evaluation of the DoD portfolio of programs, and to conduct evaluations of a subset of these programs. This report describes RAND's assessment of an Air Force program, Airman Resilience Training (ART), a psychoeducational program designed to improve airmen's reactions to stress during and after deployment and to increase the use of mental health services when needed. ART was initiated in November 2010, replacing a previous program named Landing Gear, which had been in place since April 2008. The RAND study took place from August 2011 through November 2011. This report will be of particular interest to officials within the Air Force who are responsible for the psychological health and well-being of airmen, as well as to others within the military who are developing programs for service members to help them cope with stress while in combat situations and after returning from deployment.

Airman Resilience Training (ART) may not be meeting its intended goals of promoting the resilience of deploying airmen and supporting the reintegration of returning airmen for two reasons:

1: Implementation of ART Varied Due to Logistics Constraints Placed on Briefers and Briefers' Oral Presentation Skills or Deployment Experience

RAND recommended that the Air Force conduct assessments to identify the best goals, structure, and content of ART to ensure that it is provided in an effective and efficient manner. One assessment should determine the range of resilience training needs of airmen. Another assessment should determined which resilience training needs are already being met through other training programs and which need to be a part of ART. If leadership determines to retain ART in its current format, RAND recommended improving the content and delivery of ART in the following ways: