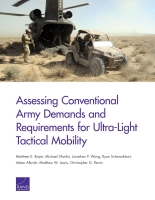 The Army owns and operates a large fleet of wheeled combat and support vehicles, divided into three categories: heavy, medium, and light tactical vehicles. It also often uses ground mobility capabilities that are not formally identified in any of the categories, such as all-terrain vehicles and motorcycles, as well as some continuing use of pack animals. These vehicles are informally classified as ultra-light tactical mobility (UTM).

Most recently, forces in Afghanistan have used several types of UTM, to include ATVs and pack animals. In April 2014 Army Forces Command (FORSCOM) initiated a plan to develop established sets of UTM vehicles for airborne forces. Given the persistent use of UTM currently and throughout the Army's history, a more detailed examination is warranted to determine whether the Army should formally acquire and equip units with such vehicles. This report assesses the unvalidated needs (demands), validated needs (requirements), current ad hoc capabilities, and key considerations for developing and sustaining formal Army UTM fleets.

The various potential UTM investments and applications do not provide equal opportunity to improve current and future Army operations. Furthermore, the threats and risks associated with some UTM applications make their use in combat less likely and investments in them harder to justify. This report identifies and assesses various potential methods for Army development of UTM capabilities. The Army should consider likely impact, risks and threats, and emerging technologies when prioritizing the employment methods, or Tactical Activities, described in this report to address with UTM program investments.

UTM is often used by Army forces, formally or ad hoc, based on a range of operational factors.

UTM capabilities provide a demonstrated alternative to increase operational flexibility through reduction of requirements for delivering an operationally significant force.

More systematic Army testing and evaluation is needed to fully assess the operational impact of UTM.

The increasing size of standard service vehicles creates a gap in tactical mobility.

This research was sponsored by Colonel Patrick Mahaney, Commander of the Asymmetric Warfare Group, and conducted within the RAND Arroyo Center's Force Development and Technology program.