An attacker's missile-borne countermeasures to cruise missile defenses are known as penetration aids, or penaids. To support efforts to prevent the proliferation of penaid-related items, this research recommends controls on potential exports according to the structure of the international Missile Technology Control Regime. 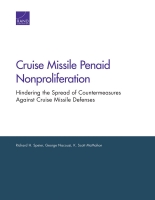 Hindering the Spread of Countermeasures Against Cruise Missile Defenses

The proliferation of weapons of mass destruction (WMD) becomes a greater threat when accompanied by the proliferation of effective means of delivery. The threat of one means of delivery, cruise missiles, will increase if proliferators can acquire effective countermeasures against missile defenses. Such countermeasures, when incorporated in an attacker's missile, are known as penetration aids or penaids. As proliferator nations acquire ballistic and cruise missiles for this purpose, it will be important to establish effective measures to counter WMD attacks. This research was designed to assist U.S. agencies charged with generating policies to discourage the proliferation of WMD and cruise missile delivery systems, thereby strengthening deterrence. Specifically, it recommends controls on potential exports of penaid-related items according to the structure of the current international policy against missile proliferation, the Missile Technology Control Regime. The recommendations account for 18 classes of such items and are based on structured interviews with government and nongovernment experts, as well as an independent technical assessment to develop a preliminary characterization of the technologies and equipment most critical to the emerging penaid threat. The project also brought together a selected group of experts to participate in a workshop to review the initial characterization of penaid technologies and equipment. An earlier report by the same authors, Penaid Nonproliferation: Hindering the Spread of Countermeasures Against Ballistic Missiles (RR-378-DTRA), presented a similar approach to controlling the proliferation of ballistic missile penaids.

This research was sponsored by the Defense Threat Reduction Agency and conducted within the International Security and Defense Policy Center of the RAND National Defense Research Institute, a federally funded research and development center sponsored by the Office of the Secretary of Defense, the Joint Staff, the Unified Combatant Commands, the Navy, the Marine Corps, the defense agencies, and the defense Intelligence Community.