Air pollution has been one of the most pernicious consequences of China's last three decades of economic transformation and growth. This report estimates the costs of three measures to reduce air pollution in China: replacing coal with natural gas for residential and commercial heating, replacing half of China‘s coal-fired electric power generation with renewables or nuclear power, and scrapping highly polluting vehicles. 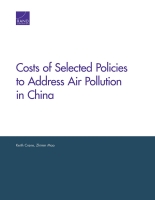 Costs of Selected Policies to Address Air Pollution in China

China Must Address Its Air-Pollution Problem, and Soon

Three Main Approaches Can Be Taken to Improve Air Quality

These Measures Come at a Cost

The research reported here was conducted in the Environment, Energy, and Economic Development Program, a part of RAND Justice, Infrastructure, and Environment.