Marijuana legalization is a controversial and multifaceted issue that is now the subject of serious debate. In May 2014, Vermont Governor Peter Shumlin signed a bill requiring the Secretary of Administration to produce a report about various consequences of legalizing marijuana. This resulting report provides a foundation for thinking about the various consequences of different policy options while being explicit about the uncertainties involved. 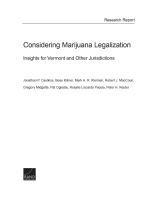 Insights for Vermont and Other Jurisdictions

Marijuana legalization is a controversial and multifaceted issue that is now the subject of serious debate. Since 2012, four U.S. states have passed ballot initiatives to remove prohibition and legalize a for-profit commercial marijuana industry. Voters in Washington, D.C., took the more limited step of passing an initiative to legalize home production and personal possession. In December 2013, Uruguay became the first country to experiment with legalization nationwide. In May 2014, Vermont Governor Peter Shumlin signed a bill into law that required the Secretary of Administration to provide a report about the consequences of legalizing marijuana. This report was produced for the Secretary of Administration in response to that legislation.

The report does not make a recommendation about whether Vermont should change its marijuana laws. The goal is to inform, not sway, discussions about the future of marijuana policy in Vermont and other jurisdictions considering alternatives to traditional marijuana prohibition.

The principal message of the report is that marijuana policy should not be viewed as a binary choice between prohibition and the for-profit commercial model we see in Colorado and Washington. Legalization encompasses a wide range of possible regimes, distinguished along at least four dimensions: the kinds of organizations that are allowed to provide the drug, the regulations under which those organizations operate, the nature of the products that can be distributed, and price. These choices could have profound consequences for health and social well-being, as well as job creation and government revenue.