Artificial intelligence (AI) is anticipated to be a key capability for enabling the U.S. military to maintain its military dominance. This report presents the results of a survey of software engineers and other technical staff at leading technology corporations and in the defense industrial base to learn their views toward the defense community and their willingness to contribute to AI-related projects for the U.S. Department of Defense. 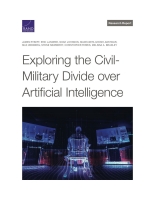 Artificial intelligence (AI) is anticipated to be a key capability for enabling the U.S. military to maintain its military dominance. The U.S. Department of Defense (DoD)'s engagement with leading high-tech private sector corporations, for which the military is a relatively small percentage of their customer base, provides a valuable conduit to cutting-edge AI-enabled capabilities and access to leading AI software developers and engineers. To assess the views of software engineers and other technical staff in the private sector about potential DoD applications of AI, a research team conducted a survey that presented a variety of scenarios describing how the U.S. military might employ AI and asked respondents to describe their comfort level with using AI in these ways. The scenarios varied several factors, including the degree of distance from the battlefield, the destructiveness of the action, and the degree of human oversight over the AI algorithm. The results from this survey found that most of the U.S. AI experts do not oppose the basic mission of DoD or the use of AI for many military applications.

This research was sponsored by the U.S. Department of Defense's Office of Net Assessment and conducted within the Acquisition and Technology Policy Center and the Forces and Resources Policy Center of the RAND National Security Research Division (NSRD).