Violent nonstate actors (VNSAs) are increasingly part of the security environment. Such organizations pose durable and direct threats to U.S. security interests, in part because of their ability to adapt. This report summarizes research into how VNSAs adapt to changes in their operational environments and provides recommendations on how the Army might anticipate such adaptations and mitigate them before they occur. 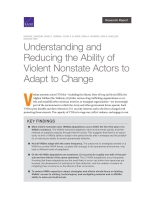 Violent nonstate actors (VNSAs) — terrorist groups, drug trafficking organizations, and others — are increasingly part of the environment in which the Army and other government forces operate. Such organizations pose durable and direct threats to U.S. security interests. The capacity of VNSAs to wage war, inflict violence, and engage in vast transnational criminal activity make them a persistent danger. Countering these organizations is difficult because they are generally flexible and structured in ways that facilitate their ability to adapt to changes occurring within their operational environments and, in some cases, beyond. This report summarizes research into how VNSAs adapt to changes in their operational environments and provides recommendations on how the Army might anticipate such adaptations and mitigate them before they occur. The authors have drawn from a series of historical case studies and relevant literature to offer insights on the most common VNSA adaptations and means of detecting and mitigating each. Among other observations, the authors note that VNSAs reach their peak adaptive capacity within the first five years of their existence but that not all VNSAs have the same level of adaptive capacity.

Not all VNSAs adapt with the same frequency

Of the 46 VNSA adaptations examined, 12 occurred in roughly one-half of the periods and two-thirds of the cases examined

This research was sponsored by the Deputy Chief of Staff, G-3/5/7, U.S. Army and conducted by the Strategy, Doctrine, and Resources Program within the RAND Arroyo Center.