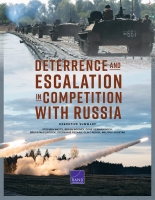 Deterrence and Escalation in Competition with Russia

In this report, the authors investigate how the United States might use its military posture in Europe (specifically, ground forces) as part of a strategy to deter these Russian malign activities.

The authors identify how forward posture could deter hostile measures through signaling the United States' commitment to its allies and partners, providing irregular capabilities for those partners and allies threatened with political subversion, providing conventional capabilities to neutralize hostile powers' coercion attempts, and providing support for other instruments of U.S. power, such as sanctions. However, forward posture can also lead to an escalation in competitor activities, increasing their sense of threat, incentivizing partners to undertake aggression at levels below armed conflict, and incentivizing third parties to act in ways that increase the likelihood of confrontation. The authors propose ways to calibrate U.S. forward posture to minimize such risks while enhancing deterrence.

The research described in this report was sponsored by U.S. Army Europe and conducted by the Strategy, Doctrine, and Resources Program within the RAND Arroyo Center.