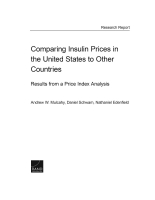 Comparing Insulin Prices in the United States to Other Countries

Results from a Price Index Analysis

Insulin prices have increased dramatically over the past decade in the United States. In this report, the authors compare international prices for insulins using a price index approach. They describe the shares of volume and sales for all insulins and different categories of insulin (including insulin type and timing characteristics) in the United States and 32 comparison Organisation for Economic Co-operation and Development (OECD) countries in 2018. For the market basket of insulins sold in both the United States and comparison countries, the authors report ratios of U.S. insulin prices to insulin prices in other countries. They found that manufacturer prices in the United States were considerably higher (often five to ten times higher) than those in other OECD countries for all insulins combined and for different types of insulin. Although the authors focused their analysis on manufacturer prices rather than on net prices after potential rebates, the analysis suggests that U.S. insulin prices would still have been considerably higher — about four times higher — than those in other countries even when accounting for potential rebates.

This research was funded by the U.S. Department of Health and Human Services Office of the Assistant Secretary for Planning and Evaluation and conducted by the Payment, Cost, and Coverage Program in RAND Health Care.