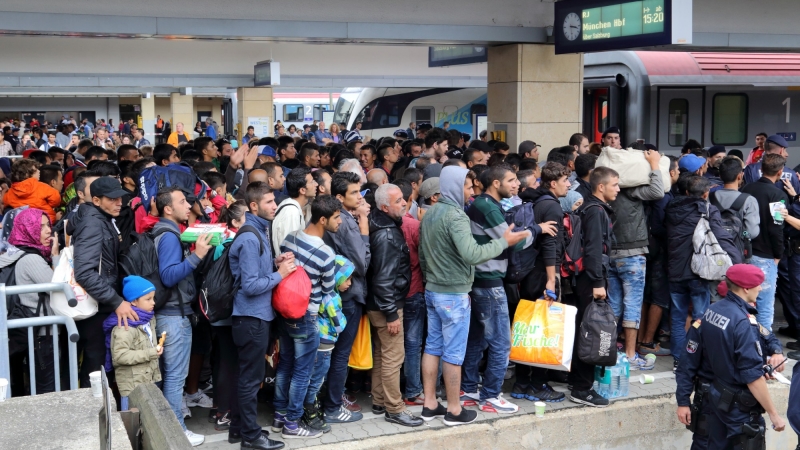 Wien Westbahnhof railway station on 5 September 2015: migrants on their way to Germany

In recent years, EU-wide debates on migration have polarised public opinion and loosened solidarity between national governments. The free movement of people within the EU was a key point of debate in the run up to the UK’s 2016 EU referendum and has remained a topic of contention for many during the Brexit negotiations afterwards.

RAND Europe’s research has provided evidence to support policy and decision making on a number of questions around migration and integration, from how big data from social media can be used to measure migration in the EU, to understanding the challenges around the economic and social inclusion of migrant EU workers in the UK. Beyond the EU, we have also helped to inform international agencies in their efforts to help Syrian refugees as they transition to lives in new host countries.

Utilisation of health services by migrants to the UK

RAND Europe and the University of Cambridge were commissioned by The Health Foundation to examine whether the use of the health services differs among migrants compared to UK-born populations. The study found that recent arrivals to the UK use the NHS significantly less than the native-born population, though the difference narrows when adjusted for age and self-assessed health. However, more work is needed to provide insights to policymakers on migrant use of the NHS, their health needs, and the quality of healthcare received.

Researchers from five organisations collaborated in an effort to use social media data to develop models for estimating real-time migration flows and stocks of migrants in the EU. The project was successful in applying a groundbreaking migrant stock model, but the approach for estimating EU mobility flows remains a work in progress. The steps to improve on the method would be to investigate different migration models and collect more data over a longer period from both Labour Force Surveys and Facebook.

Opportunities & challenges for including migrants

RAND Europe investigated the challenges and opportunities for the economic and social inclusion of migrant EU workers in Leeds, UK. The study found that the majority of EU migrants living in Leeds came to the UK to find jobs on the local labour market. Social benefits and services had no influence on their decision to move. EU migrants also bring benefits to the local economy, however there can be tensions with low-skilled British workers when they are employed in jobs below their skills level.

In a policy memo for the European Platform for Investing in Children, researchers offer a brief overview of national and school-level approaches to the inclusion of unaccompanied migrant children in formal education systems across EU member states. The policy memo also discusses wider policy responses to the integration of these children into the host societies.

RAND Europe evaluated UNICEF’s Emergency Education Response programme for Syrian children living as refugees in Jordan. Despite considerable efforts from aid agencies and the government of Jordan, 97,000 Syrian children—41 per cent of the local refugee child population—do not receive formal education. RAND Europe highlighted a series of recommendations on how to best respond to the educational needs of children who are victims of the Syrian crisis.

This policy brief looks at the education of EU migrant children in the context of intra-EU mobility. It examines some of the literature and data on the topic in order to identify key differences between EU migrant children and non-migrant children. The brief outlines some policies and practices which are aimed at improving educational outcomes and the progression of migrants in some EU member states, namely in responding to the demands and challenges in education systems.

Helping improve NGO support for migrants in the EU

RAND Europe conducted an external evaluation of the European Programme on Integration and Migration (EPIM), a collaborative initiative of 12 European foundations created in 2005, which awards grants to initiatives focusing on addressing different aspects of migration across Europe and beyond. The evaluation of the latest phase, EPIM 2012-2015, attempts to understand the programme’s achievements and impacts during those three years, with these lessons aiming to help its development in the future.

Do migrants increase transport congestion in the UK?

In 2012, RAND Europe was commissioned by the Migration Advisory Committee to look at how migration is likely to impact transport networks and congestion. The study found that migrants’ travel behaviour differed from the native UK population, with a greater percentage using non-car driving modes of travel compared to the UK born population. While migrants use of the transport network did create a cost for society, their impact per head is lower than that of the average UK national as they tend to drive less and make fewer trips overall.

In 2012, Atlantic Philanthropies, a charity that supports organisations in Ireland and Europe that work on protection, immigration and integration issues, commissioned RAND Europe to undertake an evaluation of their migration programme. Examining Atlantic’s approach to working with other organisations on migration, it was found that there is great potential for civil society organisations to play a more active role in migration, both on a national and EU level.