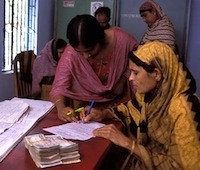 Many cash transfer programmes designate women and mothers as transfer recipients, on the assumption that doing so will lead to better outcomes. However, the evidence base for specific types of asset transfer programs (unearned income) is relatively small. This is to a large extent because, in general, programs and their evaluations have not typically been designed to understand to what extent the impacts have come from the release of the budget constraints via the transfer, changes in behaviour due to conditions attached to the transfer, or changes in the use of the household resources due to payment to women; i.e. to what extent can we attribute the success or failure of these programs to the fact that it is women, rather than men, who are receiving the transfers?

RAND undertook a systematic review for the UK Department for International Development to assess the evidence on whether transferring cash to women rather than men in low- and middle-income countries has a greater impact on household well-being.

Given the sustained popularity and importance of asset transfer programmes as a poverty alleviation tool across the developing world, it is fundamental to further develop the evidence base on which these programmes are based. Of particular relevance to this systematic review, the evidence remains limited on the extent to which the impacts of unearned asset transfer programmes have come from the release of families' budget constraints via the transfer, changes in behaviour due to conditions attached to the transfer (where conditions are attached), or changes in the use of the household resources due to payment to women. Further insights into this question can make an important contribution to the development and expansion of asset transfer programmes.

RAND's review focused on evidence on the differential impact of transferring unearned assets (particularly cash and credit) to women and men in low- and middle-income countries. The impact of interest in this review was family well-being, which encompasses a broad range of indicators including health, education, employment and income of the various members of a household and of the household as a whole. Though definitions and measures of well-being continue to be debated in the literature, in this review, a broad definition of well-being was used to ensure all potentially relevant studies are considered. In the analysis, different key measures and indices of well-being put forward were discussed, identifying which measures have been used and considered in the evidence of asset transfers to men versus women, and what areas of well-being are perhaps less considered.