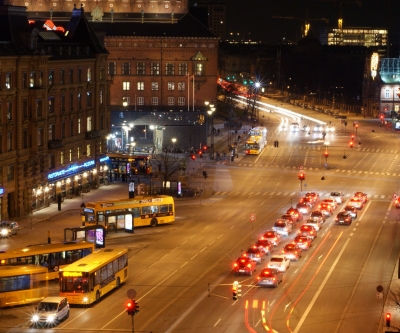 Photo by Jens Cederskjold/CC BY 3.0

To predict whether Copenhagen drivers will pay a toll to take a proposed tunnel across the city's harbour, RAND Europe researchers sought to measure drivers' 'value of travel time', as well as whether there was any evidence of 'tunnel phobia' or resistance to paying tolls.

Using choice experiments and the latest choice modelling methods, the study quantifies travellers' values of time and how this varies across the population. We find that respondents reacted more negatively to tolls than to other driving costs, but not significantly so. Additionally, there was little evidence of tunnel phobia. In fact, the tolled tunnel was viewed positively relative to the untolled routes, over and above the toll and travel time savings.

The findings will feed into Copenhagen's Travel Model to help inform the business case for the tunnel project.

The Danish Road Directorate commissioned this study to quantify the willingness of car and van travellers to pay to use a proposed new tunnel to cross to and from Amager in central Copenhagen. The results from this study will be used in a detailed travel demand model to explore the business case for the tunnel investment, ensuring that up-to-date and high-quality evidence are used to inform the policy decision.

The aim of the study is to quantify car and light van travellers' willingness to pay for a proposed new tunnel in Copenhagen, taking account of:

For a driver to choose to use a tolled facility, such as the proposed Harbour Tunnel, he or she must consider whether the time saving offered by using the tunnel is worth more than the cost of the toll. The crucial issue in predicting whether drivers will choose to pay the toll is then to understand the 'value of travel time' (VTT) of each driver. Simply put, the VTT is the monetary valuation - in this study for a driver or car passenger - of a one minute change in his or her travel time (and that of the passengers, if any). Demand for the new tolled tunnel can then be estimated by comparing travellers' VTT against the likely time savings and proposed toll, as well as taking account of aversion to travelling in a tunnel or paying a toll.

Over 3,500 travellers who made journeys by car or van, either as a driver or passenger on a weekday across the harbour in Copenhagen participated in a survey, including a stated choice (SC) experiment. The SC experiment was specifically designed to quantify respondents' VTT, as well as determine their sensitivity to paying a toll and their relative sensitivity to switching departure times compared to switching their route of travel (and using a tolled facility).

Based on the SC data, discrete choice models were developed to quantify travellers' VTT. The models reflect best practice in terms of discrete choice modelling, specifically testing whether models with additive or multiplicative error structures fitted the data better; the presence of reference dependence (size and sign effects); deterministic heterogeneity (through socio-economic segmentation); and random heterogeneity in the resulting valuations.

Below are the key findings from the research in terms of travellers' VTTs and the study methodology.