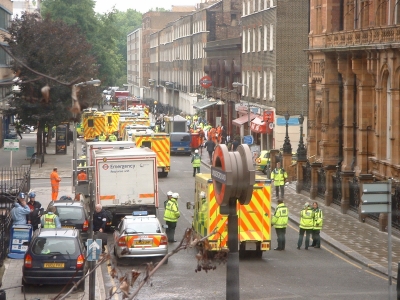 Ambulances at Russell Square, London after the 7 July 2005 bombings

Addressing terrorist threats to urban spaces is a particularly challenging task in the current security climate. As one of the 11 research institutes participating in the project, RAND Europe contributed to building a decision making framework that (i) supports security forces in responding more effectively to prevent attacks or (ii) limits the consequences of those attacks, with a particular interest in urban environments.

The intensity of counterterrorism efforts has been evident in recent years as a result of traumatic events in urban areas, such as “Charlie Hebdo” and the Paris attacks. Urban areas are specifically targeted due to their high population density, the availability of multiple targets and their cultural significance. It is difficult in urban areas for security forces to differentiate unusual behaviour or to control access to urban locations. Furthermore, these forces must at all times navigate a careful balance between privacy and security.

To enhance security and mitigate the consequences of terrorism, techniques for recognising the indications of impending attacks, and for quickly assessing responsive capabilities, must be improved. The three-year FP7 project funded by the European Commission, 'Tactical Approach to Counter Terrorists in Cities' (TACTICS), was focused on approaches to enhance security and mitigate consequences of terrorism in urban cities.

The first system is threat management capability, which enables improved decision making based on an enhanced operational picture. TACTICS allows the input of expert knowledge to allow for quicker and more precise management of the threat. The second part is threat decomposition, improving preparedness by decomposing threats into identifiable terrorist behaviours that can be detected in urban environments. The third part is capability management, which provide improved awareness of capabilities for action in dealing with the threat and any required mitigations actions. By dividing the problem in this way, and integrating three aspects into the overall TACTICS system, TACTICS proposes a more efficient team effort through which to detect, assess and respond to threats.

Ultimately, TACTICS will improve the effectiveness of security forces in counterterrorism efforts in urban areas by aiding the prevention of attacks and/or limiting their consequences. Local forces will be able to better maintain public order and national forces will more efficiently analyse threats and risk as well as coordinate anti-terrorist security accordingly. Such contributions will be crucial in the overall fight against terrorism.

Based on the research, the project team proposes the following recommendations for policymakers:

Deploy appropriate counterterrorism technologies that enhance decision making, but continue to pay attention to ongoing changes in the technology landscape.

As observed in the case of the introduction of body scanners in e.g. airport security, it is necessary to continue to enhance developed technologies to overcome their potential technical limitations against new threats or the terrorists’ exploitation of any limitations associated with existing technologies.

Apply a structured approach to deployment of counterterrorism technology.

This approach must include a particular emphasis on the respect for national and European legislation and on the definition and respect for appropriate safeguards. A systematic assessment of needs and requirements for counterterrorist technologies will help ensure that the technology that is procured and deployed meet the capability need as well as fit in with national and European legislation.

Carefully consider the extent to which data collection and data sharing in the context of counterterrorism is proportionate, necessary and justified.

When policy-makers consider the introduction of new technologies in the context of counterterrorism, they should identify and address potential privacy issues as early as possible in the capability assessment and procurement process.

These partnerships need to exist within all levels of national government, law enforcement agencies, private sector and the communities, as well as an integrated approach in collaboration with international partners and key allies. Partnership with citizens is equally important, as observed in the range of acceptance of the CT technologies in the case studies.

Carry out regular audits and evaluations on the system use.

In order to ensure that the counterterrorism technology is operationally effective, it is necessary to establish an approach to evaluating its use and effectiveness. This is often a challenge. However, another main benefit of undertaking evaluations is the potential to flag up capability needs as a result, in terms of either systems performance or operator/manager training needs.