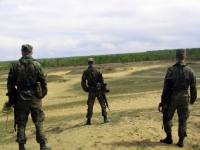 With EU Member states in the grip of austerity, there is fresh impetus behind efforts to improve the efficiency of defence in Europe. Many of these efforts focus on the pooling and sharing of equipment between member states, to exploit economies of scale and scope, while less attention has been paid to the potential benefits from reducing the number of military personnel.

RAND Europe has addressed this gap by examining one specific military sector, European land forces. As part of a report from the Bertelsmann Stiftung, The European Added Value of EU Spending, RAND Europe contributed a major case study on the potential savings from integrating land force personnel across EU Member States.

The analysis considers the potential benefits from integration of these forces while still maintaining sufficient capacity to fulfil the set of security and defence tasks delineated by the 1992 Petersberg Declaration (which include humanitarian, peace-keeping, disarmament and post-conflict stabilisation tasks).

Smaller, more coordinated European land forces could save large amounts of money across the EU Member States. The financial savings are estimated at €3–9 billion per year, depending on the chosen scenario, without reducing military capability.

The estimates are based on a continuation of today's wage structures and do not attempt to quantify likely further savings that would follow from a smaller total of military personnel, such as bases, training, consumables and pension payments.