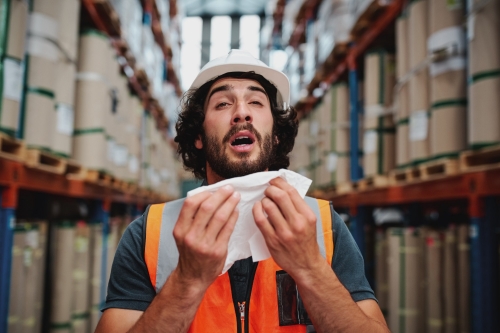 Seasonal influenza is a serious, global public-health issue that affects about 1 billion people every year. Certain high-risk groups – the elderly, young children, pregnant women, and those with chronic comorbidities or compromised immune systems – are disproportionately affected by seasonal influenza and drive the majority of associated direct healthcare costs.

Other groups, such as healthy working-age adults, are less likely to become severely ill from influenza but may still develop minor to moderate symptoms that require time away from work (absenteeism) or reduced levels of productivity while at work (presenteeism). Working-age adults may need to care for a partner or other dependent within a high-risk group that is infected with influenza, which also may result in their absenteeism or presenteeism. In 2019, absenteeism and presenteeism cost the UK economy almost £92 billion because of ill-health; however, the economic burden specific to seasonal influenza is not well understood.

In addition, absenteeism and presenteeism among healthcare workers, coupled with the increased demand for primary and secondary healthcare services during the influenza season, may result in disruptions to the UK’s National Health Service (NHS), including delays, cancellations or rescheduling of routine services. Such disruptions represent unaccounted-for indirect costs. The nature and scale of these impacts related to seasonal influenza require further investigation.

RAND Europe and the University of Cambridge have been commissioned by Sanofi to conduct an independent research study to explore the indirect economic and societal burden of seasonal influenza, including its effects on the UK’s workforce (absenteeism and presenteeism) and healthcare system (disruptions to routine services).

To do this, we are performing a rapid evidence assessment of the published literature and of a sample of publicly available datasets, and we are conducting interviews with clinical experts and a public survey. Quantifiable data from these sources will be fed, as relevant, into a macro-economic model that will also incorporate – based on epidemiologic information – differing scenarios of influenza infections rates. Indirect societal impacts identified through this research, which are not quantifiable, will undergo qualitative thematic analysis and synthesis.