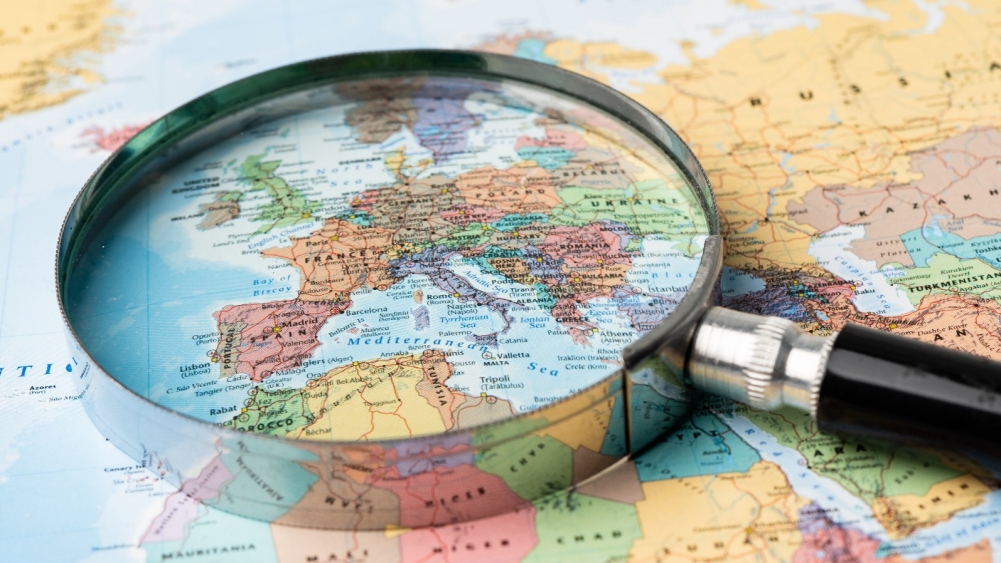 Using the framework of RAND's original 2018 Truth Decay study, which focused on the United States, researchers uncovered evidence for the trends, drivers and consequences of Truth Decay in Europe. As the phenomenon is less pervasive than in the US, however, they also suggest actions to slow its growth.

The evolving, uncertain and emotional context of the COVID-19 pandemic has highlighted the need for accurate and reliable information to make sound decisions in both private and public spheres.

While attention has increased on access to, and the role of, information in decision making − with its resultant challenges such as disinformation, the role of information technology and an increasingly complex information environment − the role of facts and analysis in public life appears to be changing. Yet, empirical data that allows us to assess the extent, scope, and nature of these changes is lacking.

This study examined the evolution of the role of facts and evidence in public life in Europe. The research is part of the Countering Truth Decay Initiative, a portfolio of projects by the RAND Corporation.

Researchers took the framework of RAND's original 2018 Truth Decay study, which focused on the United States, and asked whether there is evidence for the trends, drivers and consequences of Truth Decay in Europe. They analysed available data that could serve as indicators for the trends, drivers or consequences of Truth Decay, and reviewed empirical literature on the causal relations between them.

The research goes beyond a recording of the current climate and explores whether the situation is getting worse, i.e. whether the disagreement about facts and data is increasing, whether the volume and resulting influence of opinion (over fact) is growing, and whether trust in formerly respected sources of information is declining.

Overall, we found evidence of the occurrence of all four Truth Decay trends in Europe, although the evidence is not as overwhelming nor are the trends as pronounced as in the United States and there is a lot of diversity across sectors.

An increasing disagreement about facts and data, at least in some European countries. For example, we see growing misperceptions about levels of migration and increasing vaccine scepticism in some countries. Yet, with limited pan-European research available on this matter, it is difficult to say whether this trend is consistent across the continent.

A blurring of the line between opinion and fact, as illustrated by an increasing prevalence of interpretive journalism and advertorial content intertwined with news reporting. There appears to be a north-south divide in Europe, where news reporting tends to be more neutral in Northern countries, while reporting in southern European countries tends to more integrated with commentary and opinion. The evidence does not show, however, whether interpretative journalism has increased in Europe overall.

An increasing relative volume and resulting influence of opinion over fact, as illustrated by the explosion of the availability of online news outlets, including the emergence of niche media that cater for a select audience that share similar beliefs.

In contrast to the trend in the United States, there is increased trust in governance institutions across Europe since the end of the financial crisis. Trust in the media in Europe has been declining gradually over the last two decades.

The differences between the US and Europe can be partly explained by the evidence for the drivers of Truth Decay.

Changes to how information is shared in Europe has driven a rise in Truth Decay. New information and communication tools, in particular social media, have increased people’s exposure to information and impacted on the cognitive processing and biases that affect Europeans.

The education systems across Europe differ from those in the United States, making these perhaps less prone to being a driver of Truth Decay, but rather a possible part of its solution. European education systems appear to have recognised the importance of critical thinking skills and civic education for a future generation of media consumers and participants in their democratic societies.

There is evidence for an increase in polarisation in different parts of Europe (whether political, sociodemographic, or social and economic), but the overall extent of polarisation is not as strong and not as widespread as that evidenced in the United States.

There is some erosion of civil discourse. Civil discourse in multiple European fora is not always informed, honest, open-minded and constructive. This may be due to several factors that aid the production and dissemination of discourse such as cognitive bias, changes in the information system and the media business model.

We found evidence for uncertainty in Europe and some evidence that this uncertainty was driven by disinformation and the trends of Truth Decay. This evidence was apparent in economic uncertainty as well as government policy uncertainty.

If Truth Decay in Europe is at a less advanced stage than in the US, there are actions that could be taken to try to prevent or slow its growth and prevent trends from following a similar trajectory as they have in the US. These include: 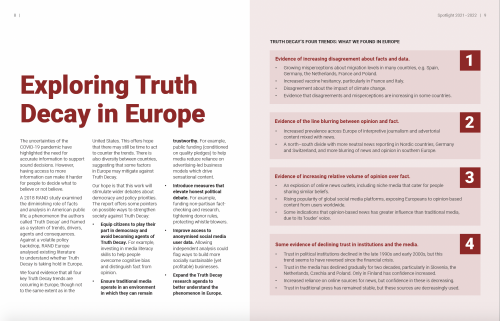