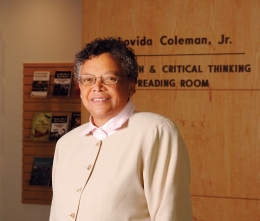 In 40 years of practicing law, Lovida Coleman, Jr., built a reputation as a relentless seeker of justice and truth. As she watched protests in one city after another, she became convinced that RAND needed to get involved. She became a driving force behind a RAND venture to improve police–community relations.

Lovida Coleman, Jr., thought of an old phrase as she watched news coverage of protests in Ferguson, Mo., following the 2014 police shooting of an unarmed black teenager there.

What was missing in Ferguson—and in Baltimore, Cleveland, Cincinnati, Tulsa, Baton Rouge, Minneapolis—was freedom from fear. “In my mind,” she wrote to a friend, “effective law enforcement respected and appreciated by all communities is essential to secure the right to 'Freedom from Fear.'”

Coleman was never one to sit back and wait for an answer. In 40 years of practicing law, she had built a reputation as a relentless seeker of justice and truth. As she watched protests in one city after another, she became convinced that RAND needed to get involved.

Coleman had been a part of RAND for much of her life, as a donor, an adviser, and a longtime member of the Board of Trustees. In that, she had followed her father, William T. Coleman, Jr., a former U.S. Secretary of Transportation and a lawyer who cowrote the legal brief in the landmark civil rights case, Brown v. Board of Education.

“She understood what RAND could do, and she understood that RAND should be more of a voice,” said Anita Chandra, a senior policy researcher at RAND.

Another prominent attorney with a long connection to RAND had started to ask the same question: What could RAND do? Terry Lenzner, with his wife, Margaret, was putting together a fund to support a venture at RAND that might improve police–community relations. Coleman became a driving force of that effort.

She had a prodigious Rolodex. She had worked as an attorney in the U.S. Department of Justice, a partner at a top Washington, D.C., law firm, and a risk management consultant. She was an active supporter of the NAACP Legal Defense and Educational Fund.

“Being able to sit on a stoop or play hopscotch or ball are elements of Freedom from Fear that too many neighborhoods lack.”

Freedom from fear, she wrote in an email to the Lenzners, required law-enforcement practices that could de-escalate tensions and restore confidence, especially in minority communities. It also meant more-effective policing to reduce crime: “Being able to sit on a stoop or play hopscotch or ball are elements of Freedom from Fear that too many neighborhoods lack,” she wrote.

Her vision helped inspire a tabletop exercise developed at RAND to bring together communities around questions of policing. The exercise is designed to help police, local government officials, and community groups think through how they would respond to a crisis, and how they could de-escalate it.

“She brought the drive,” Margaret Lenzner said. “She was very committed—very diligent about trying to make something happen.”

“She was,” Lenzner added, “a champion of justice.”

Coleman died unexpectedly in January 2018. RAND's president, Michael D. Rich, remembered her as “a valuable and trusted adviser, an incisive critic, and a very good friend.” She was 68 years old.

She had left a bequest to RAND of more than $250,000. In her honor, the fund pursuing her vision of police–community relations free from fear was renamed: the Lenzner-Coleman Challenge Fund.