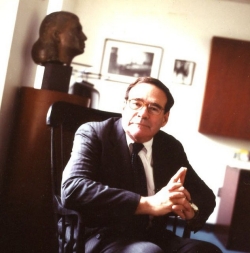 In 1964, Terry Lenzner, who had just graduated from Harvard Law School, traveled to Philadelphia, Mississippi, to work with John Doar, then the assistant attorney general for civil rights in the U.S. Department of Justice, to investigate the murders of three civil rights advocates.

It was “Freedom Summer” in Mississippi, a campaign to increase the number of African-Americans registered to vote in the state. Michael Schwerner, Andrew Goodman, and James Chaney had been civil rights workers engaged with the campaign. Their efforts were important, but also risky. The Ku Klux Klan was extremely active in Mississippi. On June 21, they went missing. Two days later, their car was found on fire.

Lenzner, in his capacity as a federal attorney, investigated their murders, ultimately helping to convict seven of the white suspects in the “Mississippi Burning” trial, including Cecil Ray Price, the town's deputy sheriff and a member of the Ku Klux Klan's White Knights.

Over the course of his fifty-year career as a lawyer and investigator, Lenzner played key roles investigating the 1965 “Bloody Sunday” case in Selma, Alabama; prosecuting organized crime as a member of the U.S. Attorney's Office for the Southern District of New York; investigating the Watergate burglary and cover-up; and much more.

In 2015, Lenzner, a member of the then RAND Justice, Infrastructure, and Environment Advisory Board (now evolved into the RAND Social and Economic Policy Advisory Board) launched the Lenzner Challenge Fund for Criminal Justice Research because, as he explained, “The numerous events in the last 18 months throughout the country—from Ferguson, to Baltimore, New York, and Texas—point to a pressing need for improvement in police-community relations. Having worked on such issues over the course of my career, I see great value in creating a program at RAND designed specifically to lay out solutions based on unbiased research.” He then joined with fellow board member, Lovida Coleman, to further deepen the work, now known as the Lenzner-Coleman Challenge Fund for Criminal Justice.

Terry Lenzner passed away on April 24, 2020, but this legacy endures. Framed as a multiyear initiative, the goal of the Lenzner-Coleman Challenge Fund is to inform public debate on police-community relations. RAND has undertaken research to better understand the conditions that give rise to tension between police departments and the affected communities, the effectiveness of police practices, and the efficacy of approaches to address the root causes of police-community tensions. For instance, researchers have developed a novel tabletop exercise for use by communities to strengthen police-community relationships. The Challenge Fund endeavors to develop practical tools and inform public policy to more effectively address public safety and community well-being.

To learn more about the Lenzner-Coleman Challenge Fund for Criminal Justice Research, and to find out how you can participate or contribute, please contact Will Courtney at wcourt@rand.org.

Read more about the Social and Economic Policy Advisory Board