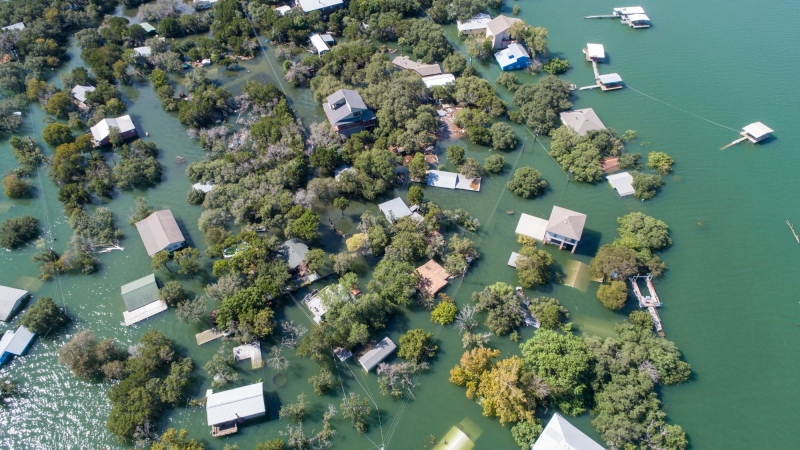 RAND researchers have a long and proud history of shedding light on the social and economic implications of a changing climate, its impacts on the natural environment, and the challenges it poses to communities, regions, and our national security. Today, as the issue of climate change has moved from distant threat to present reality, current RAND research projects continue to tackle this difficult public policy issue.

RAND has made its mark in climate change policy through a focus on decision framing, novel and rigorous approaches to complex problem solving, decision support, and engagement with affected communities. Climate change remains a particularly vexing challenge, but where we have made a difference in the past and continue to press forward is our focus on helping communities and nations find their own paths toward durable solutions.

Water Management in the Netherlands

In the 1960s, RAND researchers considered the analytical challenge of adaptation—a foreshadowing of a central challenge of our time, but well before increasing storm intensity could be associated with increasing greenhouse gas-driven warming.

In response to a devastating storm surge that struck the Netherlands in 1953 and killed more than 2,000 people, the Dutch were deadlocked for years over a strategy for flood protection in the Zeeland area. Options included closing off the estuary with a barrier, building dikes along the estuary shores, and building a moveable barrier. Each choice had a different set of costs, environmental impacts, and risks. RAND worked with Dutch experts to build a model of the flood control system, and made a set of recommendations that were ratified by the Dutch Parliament.

Subsequently, in the 1970s, the RAND Policy Analysis of Water Management in The Netherlands (PAWN) project laid the foundations for the current Dutch system of integrated flood risk management, and the founding of the internationally-known engineering firm Deltares that has spread these RAND-developed methods to regions increasingly at risk of flooding throughout the world.

Support for the Montreal Protocol

In the mid-1980s, RAND was asked by the the United States Environmental Protection Agency to provide an analysis of the costs and benefits of phasing out chlorofluorocarbons (CFCs), which had been found to be degrading the stratospheric ozone layer that protects the earth’s surface from harmful ultraviolet radiation. The RAND study and subsequent updates provided a critical analytical foundation leading to the 1987 passage of the Montreal Protocol, a global agreement to phase out the production and consumption of ozone-depleting substances.

Following ratification of the Montreal Protocol, Congress began turning its attention to the threat of greenhouse gas warming. The banned CFCs also were powerful greenhouse gases, but the larger target of opportunity—and divisiveness as it would turn out—was the growing emissions of carbon dioxide from burning fossil fuels for electricity, transportation, and industry, along with deforestation, agricultural activities, and other land use changes that released methane, another potent and pervasive greenhouse gas.

In the early 1990s, after the end of the Cold War, RAND produced one of the first studies of climate change mitigation as a sequential decision problem under uncertainty using traditional risk analysis, one of the early studies of the implications of climate change occurring abruptly (within a decade or two), and the first study of an adaptive approach to greenhouse gas mitigation policy structured around an early form of robust decision making (RDM).

By the early 2000s, RAND studies began outlining economically viable approaches for an energy transition through economic analyses and the introduction of robust decision making as a tool for decision support. RAND was actively engaged in a number of projects for the United States Department of Energy and others focused on pathways toward a transition in the energy sector from reliance on fossil fuels to the opportunities presented by solar, wind, and other forms of renewable energy. Also during this period, RAND continued to push the envelope of climate policy analysis, producing one of the early agent-based modeling studies on alternative policy architectures for greenhouse gas mitigation and a study on the policy implications of non-linearities in the climate system.

A grant from the National Science Foundation enabled RAND to work with a water agency in southern California to help its managers and political leadership begin to grasp the implications of changing climate on reliability of their water supply for their growing population and economy. The work showed that when confronted not only with a problem but with potential solutions, water managers were more likely to view adaptation to a changing climate, however uncertain and daunting, as manageable. This work led to a series of innovative RAND studies on long-term water resources planning for the state of California as a whole, to the Colorado River Basin; New York City, Lima, Peru; Africa; and Jinan, China. In nearly each case, RAND’s recommendations and decision support tools shaped major planning and implementation pathways.

Hurricane Katrina struck the coasts of Louisiana, Mississippi, and Alabama in 2005. The storm set off a massive analytical effort by the State of Louisiana to chart a path toward living with the water that would reduce the state’s exposure to storm damage and forestall the continued loss of coastal lands and fisheries so vital to the state’s economy and protection.

Louisiana sought RAND’s help in organizing their decisionmaking on a portfolio of actions to be staged over the next several decades, accounting for the likely but still uncertain impact of rising seas on the success of the state’s investments. RAND contributed to an enduring, yet adaptable master plan for the state. RAND’s work in Louisiana led to engagements in other coastal locations: for the World Bank in Ho Chi Minh City, the San Francisco Bay-Delta, southeast Florida, and Jamaica Bay, New York—all of which were driven by near-term concerns about coastal flooding and other impacts against the backdrop of rising seas.

In the late 2000s and early 2010s, RAND conducted a number of studies for clients and funders on the cost and equity impacts of transition paths toward a lower greenhouse gas emitting economy.

Seminal reports were published on the costs, benefits, and greenhouse gas implications of shale oil production, liquid fuels production, and the potential and high variability in reducing greenhouse gas emissions from combusting biomass.

We looked at the impacts of e-readers and ride-sharing services on electricity use and greenhouse gas emissions. We considered the challenges in the housing sector of introducing innovations into home building that would lead to more energy efficient structures. And we considered the potential of reducing greenhouse gas emissions from the consumption of energy in commercial buildings, one of the largest sources of emissions in the economy.

Current work is focused on working directly with cities and states on pathways toward “decarbonization.”

In 2007, the Intergovernmental Panel on Climate Change was awarded the Nobel Peace Prize and RAND’s own Robert Lempert, a key contributor to the IPCC’s Fifth Assessment, became a Nobel Laureate. Since that time, RAND researchers have continued to contribute to IPCC assessments, including the Sixth Assessment Report. RAND researchers recently have also played significant roles in the United States National Climate Assessment process as well as assessments conducted by the state of California.

Support for Urban and Regional Adaptation

In the 2010s, RAND researchers have deepened their engagement with many communities in the United States and abroad on issues directly and indirectly related to climate change. Cities have been a central focus of our work. Many cities in the eastern United States are contending with trends toward more extreme precipitation events and the consequent strain such events place on stormwater drainage and sewage treatment infrastructure—largely unseen but hugely costly public investments that are no longer properly sized for the volumes they now must process. RAND’s study for Allegheny County, Pennsylvania on options for upgrading its stormwater management system in the face of a changing climate presents a template for other cities embarking on similar investment studies.

Additionally, with a five-year grant from the National Oceanic and Atmospheric Administration, RAND now leads the Mid-Atlantic Regional Integrated Sciences and Assessments (MARISA) project under NOAA’s Climate Programs Office—the source of support for the quarterly Chesapeake Bay Watershed Climate Summary. MARISA provides us with an avenue for working directly with communities throughout the Mid-Atlantic region on their most pressing needs for incorporating climate information into their decisionmaking on stormwater, transportation, water supply, energy, and land use.

RAND also is providing information and insights to the Pentagon on the impacts of a changing climate on the Arctic and potential for mitigation of adverse effects on military training, operations, and acquisitions.