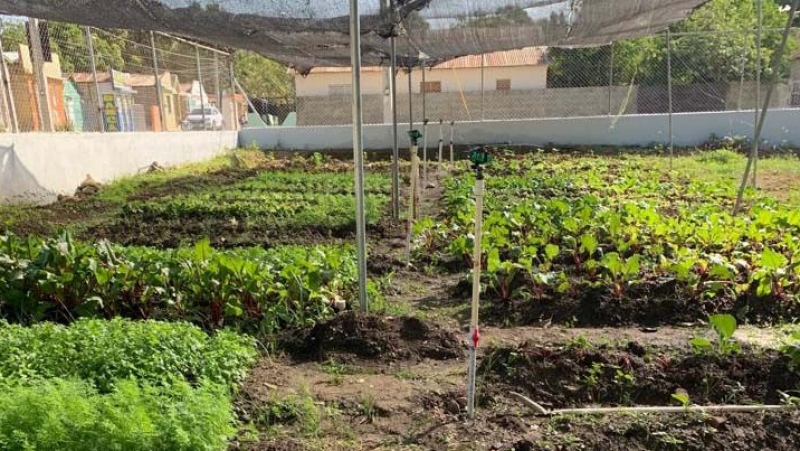 Drawing on lessons learned in Honduras and Bolivia, RAND took a different approach to food insecurity in the Dominican Republic. Working with local collaborators and stakeholders, RAND identified urban gardens as a possible way to support food security in a sustainable way. This pilot study integrates urban gardens and peer nutritional counseling to examine effects on adherence, viral load, and other important outcomes.

This is one of the first studies of its kind, developing sustainable urban food production complemented with nutritional counseling. The study is currently underway, and updates will appear on this site as they become available.

In the Dominican Republic, the team conducted exploratory research in four areas of the country. As was the case in Honduras and Bolivia, they found high levels of food insecurity (58% severe and 11% moderate) and overweight/obesity (24% overweight and 14% obese). The team also found a direct relationship between the two—severe food insecurity was related to increased body mass index, body fat and overweight, especially among women.

Since 2008, when the Dominican Republic became a middle-income country, the World Food Programme has not provided food assistance except in emergencies. Thus, coupling nutritional counseling with food assistance was not an option. Further, as was the case in Honduras and Bolivia, there were few nutritional training programs and few nutritionists trained to care for individuals with HIV.

Together with local collaborators and stakeholders, we brainstormed possible strategies. We identified urban gardens as a potential way to support improved food security in a sustainable fashion. To shape our approach, we conducted in-depth interviews and focus groups with women in three communities in the eastern part of the country.

Participants identified economic instability as the primary driver of their food insecurity, brought on by stigma and discrimination in the employment and social sectors. Further analysis revealed the need for social support among this population, which could be achieved through group-based and peer-led activities. Based on this initial investigation, we developed a partnership with the Dominican Ministry of Agriculture to conduct pilot urban gardens projects in these three communities.

RAND's work identifying high levels of food insecurity, coupled with advocacy by key partners like the Dominican National HIV/AIDS Council (known locally as CONAVIHSIDA), influenced policymakers to expand eligibility for existing social protection programs among individuals living with HIV. The World Food Programme’s office in the Dominican Republic has also made nutritional counseling and urban gardens a focus of their HIV programs in the country.

Our pilot work in Honduras and Bolivia established that food baskets could address food insecurity among people living with HIV in low resource settings. However, such efforts are typically not sustainable, and in this population, obesity was a growing concern. Sustainable approaches that increase access to food and also promote balanced nutrition among those with HIV are needed. Urban gardening together with peer nutritional counseling represents a potential solution.

Sustainable approaches that increase access to food and also promote balanced nutrition among those with HIV are needed.

This current study, funded by the National Institutes of Health, is developing an intervention that integrates urban gardens and peer nutritional counseling. Researchers are testing how the intervention affects viral load, adherence to ART, and other important HIV-related outcomes. Key partners in the Dominican Republic include the Universidad Autónoma de Santo Domingo (UASD), the ministries of Agriculture and Public Health, the National HIV/AIDS Council (CONAVIHSIDA), and the World Food Programme.

This is one of the first studies to develop a sustainable urban food production approach that involves nutrition counseling among people living with HIV. Key products will include 1) an easy-to-use peer nutritional counseling curriculum and urban gardens training materials and 2) pilot data on the feasibility, acceptability, and effects of the intervention on primary outcomes and potential mediators. If study results are promising, Derose and her team will pursue funding to test the intervention’s effect across a larger number of clinics and HIV patients in the Dominican Republic.