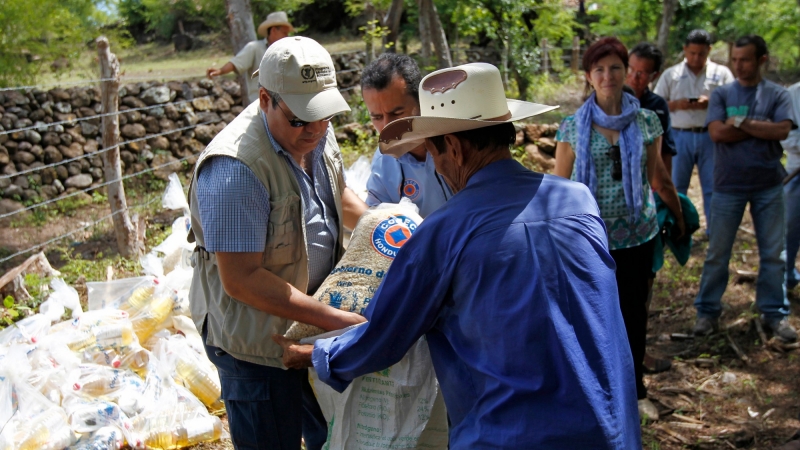 RAND’s work in Honduras and Bolivia grappled with the challenge of improving adherence to antiretroviral therapy (ART) among individuals for whom food insecurity was a constant source of anxiety and poor nutrition.

In Honduras, RAND explored finding the right balance between educating participants about nutrition and providing them with food. In the end, education alone turned out to be effective with people of all nutritional statuses—teaching participants about how to have good nutrition on a low budget reduced their food insecurity while also increasing weight for those underweight and reducing weight for those overweight. RAND’s efforts also helped to develop human capital: The peer nutrition counselors that RAND trained were later hired by the Ministry of Health to support the government’s nutrition education efforts.

In Bolivia, RAND faced a different challenge—to explore, in partnership with the World Food Programme, how to transition recipients off of food support and into salaried jobs. To provide context, RAND documented the extraordinary measures that participants took to maintain adherence and livelihoods despite the barriers they confronted. Participants also noted characteristics of the health care system that made balancing more challenging—for example, clinic schedules and locations. RAND also supported the World Food Programme’s efforts to implement nutritional counseling at HIV clinics. This work prompted the National AIDS Program to focus on nutrition in its national plan.

This study was the first prospective clinical trial to test how a nutrition intervention would affect ART adherence among adults living with HIV in Latin America, and the first to our knowledge in a cohort with a high proportion of overweight or obese ART patients.

Among participants in this study, many fewer were underweight (11 %) than overweight or obese (31 %). As a result, it was possible to test whether food aid and nutrition education would improve ART adherence in a context of high food insecurity and among patients with varied nutritional statuses.

Many participants had compromised HIV status. They were at all stages of ART and adhered poorly to treatment. In all four study clinics, participants received nutrition education from study-trained nutritionists using a highly interactive curriculum that was developed after extensive research on locally available foods and dietary patterns among people living with HIV. In two of the study clinics, participants also received a monthly household food basket.

Both strategies improved participants’ adherence to ART (making appointments, picking up medications on time, and taking their medications as prescribed). Adding the food basket increased the effect for picking up medications on time. However, the researchers concluded that the content of the food basket in environments such as this one may need reappraisal. The types of foods provided were high calorie because they were mostly intended for areas where undernutrition is the norm and residents need calories.

After the study was completed, the nutritionists trained through RAND’s study were later hired by the Ministry of Health to support nutritional care at government HIV clinics. Many of the peer nutritional counselors that we trained through an extension project in Honduras were also hired by the HIV clinics. Thus, the project helped to develop human capital to support Honduras’ efforts to address the food and nutrition security of individuals living with HIV. The training manuals and intervention materials developed during the study became resources for the Ministry of Health to use in HIV care.

In Bolivia, the World Food Programme implemented nutritional education via trained nutritionists and a monthly household food basket and partnered with RAND to explore the feasibility of transitioning recipients off food support and into income generating projects. RAND and the World Food Programme conducted exploratory research to understand the income-generating experiences of food insecure ART patients in four Bolivian cities. This research revealed the complex economic lives of participants, as they struggled to manage their ART treatment and livelihoods simultaneously. Lack of HIV disclosure, stigma and discrimination were prevalent, making it difficult for participants to adhere to treatment.

This exploratory research influenced the National AIDS Program to include nutrition as a focus in its national plan. The Ministry of Health hired nutritionists trained through these efforts to support nutritional care at government HIV clinics. Municipalities that had participated in this research included a line item in future budgets for nutritionists at their HIV clinics.