Helping Pittsburgh respond, adapt, and grow in the face of chronic stresses and acute shocks 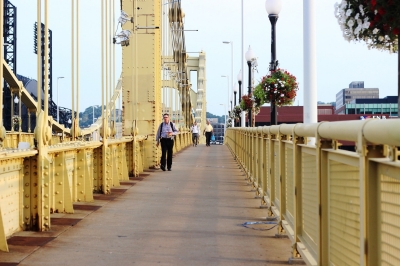 Pedestrians walk across the Roberto Clemente Bridge in Pittsburgh.

Over the past three decades, Pittsburgh experienced economic hardship and population loss, losing 40 percent of its population between 1970 and 2006, following the collapse of the region's steel industry. Pittsburgh has rebounded from this economic and population shock in the past 10 years, building on its strengths as a hub of education, technology, and medicine.

However, the city still faces stresses associated with its industrial legacy, and must respond to 21st century forces of urbanization, globalization, and climate change. Persistent racial and socioeconomic inequities indicate that new opportunities are not equally shared, and fragmented governance and planning in the region constrain resources and inhibit efforts to try to address the city’s challenges.

As part of its work as a strategy partner for 100 Resilient Cities (100RC), RAND has been working with the city of Pittsburgh since 2015 to develop Pittsburgh’s first city-wide Resilience Strategy.

Pittsburgh’s Resilience Strategy, known as OnePGH, is a comprehensive strategy to address the current and future challenges that confront the city and its residents.

OnePGH builds on the city’s existing “p4” framework and a wealth of community assets to create a holistic, community-centered approach. It describes the specific ways in which different sectors will work collectively to make Pittsburgh a resilient city in terms of four key values: People, Place, Planet, and Performance.

Roughly two years of effort has culminated in OnePGH, the city’s Resilience Strategy, officially launched March 8, 2017. The strategy is based around the four values of People, Place, Planet and Performance. Each value has associated objectives and actions that address the city's many shocks and stresses, and strengthen the urban ecosystem. 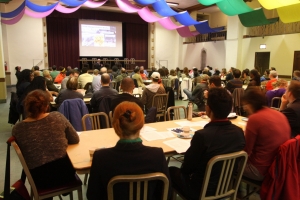 Attendees at a deliberative forum in East Liberty, Pittsburgh, in 2015

RAND plans to continue to support the city during OnePGH implementation through a key next step identified in the strategy: Pittsburgh Survey, 2.0. The survey, inspired by a ground-breaking survey of city residents administered over a century ago, will become the central monitoring and evaluation mechanism for the implementation of the resilience strategy. It will help measure progress towards core resilience and related wellbeing objectives, organize and track relevant actions like those in the strategy, and offer a foundation of data to better understand and communicate the effectiveness of investments, initiatives, policies, and programs to support resilience and wellbeing in Pittsburgh.

The survey will also help share the story of resilience and wellbeing in the city via a publicly accessible dashboard, interactive visualizations, and digital storytelling methods. RAND is currently working on initial steps for the survey, including convening a multi-institution research team and developing an initial measurement system for resilience and wellbeing.