Accelerating the Internet of Things in the UK 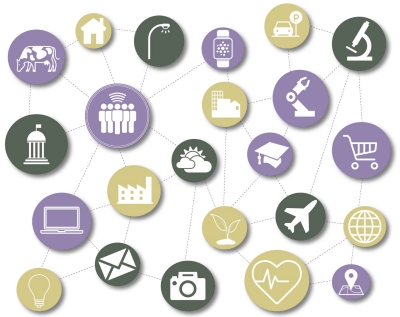 RAND Europe carried out a study to support a process for policy feedback that will inform the development and adoption of the Internet of Things (IoT) in the UK. The study team gained a better understanding of what is happening 'on the ground' in the UK through insights from IoT implementations and informed users of technology. The study generated a set of themes for action and further exploration by the policy community in the UK.

Connecting the physical and virtual worlds underpins the ambition of the Internet of Things (IoT). The enormous growth in the number of connected ‘things’ around the world today has resulted in the IoT emerging as a critical area of interest to policymakers.

Many countries, including the United Kingdom, now regard the IoT as a highly significant, even strategic-level infrastructure for economic growth. As a result, the IoT has been receiving considerable attention from industry, universities and government alike. Furthermore, consumers have a growing awareness of the connected devices and sensors that enable the IoT, mainly through domestic equipment (e.g. smart TVs and Internet-accessible home security and control systems for heating and lighting).

It is evident the IoT holds the potential for major economic opportunities across a wide variety of consumer and industrial sectors; however, there are important policy issues that affect the development and adoption of the IoT across these sectors.

With a growing body of IoT projects and commercial activities in the UK, there is a need to use evidence from ‘real world’ IoT implementations to inform policy in this rapidly emerging area. Furthermore, the significance of involving consumers of technology in informing IoT policy and in decision making cannot be overestimated, particularly when key decisions are to be made which touch upon such issues as privacy, security and trust. Clearly, there are numerous challenges that will require integrated and consistent policy responses across government.

Against this backdrop, the central aim of this study, commissioned by IoTUK and BCS, The Chartered Institute for IT, was to support a process for policy feedback that will inform the development and adoption of the IoT in the UK. The project team adopted a bottom-up approach that allowed it to bring together insights from businesses and individual users of technology. This enabled the team to get a better idea of what is happening ‘on the ground’ in the UK.

To gain a rounded picture of the potential policy implications of IoT developments in the UK, the project team adopted a mixed-methods approach to designing the study. Broadly, the team conducted the research in three distinct but overlapping phases.

The findings from the research present a number of opportunities and challenges for the development and adoption of the IoT in the UK.

Based on these opportunities and challenges, the study attempted to support policy communities (including national and local government policymakers, industry, innovators, academia and the public) through describing a set of wide-ranging policy objectives and associated priority topics for further discussion and exploration. Specifically, the research identified four themes for action, aimed at:

The infographic shown below depicts each of the proposed priority topics for consideration, clustered by policy objective. 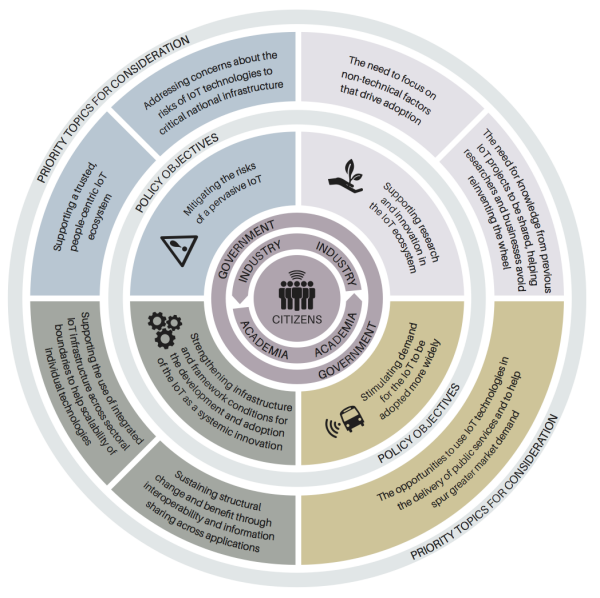