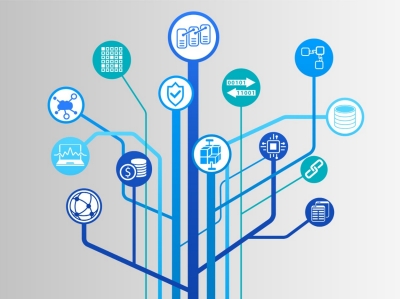 Even though technological solutions based on distributed ledger technologies, including Blockchain, are at a relatively early stage of adoption and significant challenges remain, they hold the potential for major opportunities across several sectors.

Through an accelerated literature review and interviews with different stakeholders across industry, the public sector, academia, and the third sector, our researchers highlighted a set of priority areas that may require future standardisation to support the technology's growth.

Distributed ledger technology (DLT) refers to a type of database spread over multiple locations, which can be used like a digital ledger to record and manage transactions. Blockchain, which comprises of ‘blocks’ of transactions, is one of the most well-known uses of DLT and underlies the cryptocurrency Bitcoin. DLT has received growing attention in recent years as an innovative method of storing and updating data within and between organisations.

Even though DLT/Blockchain-based solutions are at a relatively early stage of adoption and significant challenges remain, they hold the potential for major opportunities across several sectors. While the financial sector has shown widespread early interest in DLT/Blockchain, other public and private sector organisations that rely on the keeping of records and management of secure transactions may also benefit. DLT/Blockchain may also provide opportunities in the healthcare, pharmaceutical, creative, and food sectors.

In light of the growing interest in DLT/Blockchain, standardisation efforts have gathered momentum, particularly with the setting up of the International Organization for Standardization (ISO) technical committee on Blockchain and electronic distributed ledger technologies.

Against this backdrop, the British Standards Institution (BSI) commissioned RAND Europe to carry out a rapid scoping study to understand some of the areas related to DLT/Blockchain that would potentially require standardisation based on stakeholder needs in the UK.

Understanding the current landscape of DLT/Blockchain and the priority areas for the UK regarding the development of standards will be an important step in developing a strategy to maximise the benefits of this technology for UK and global stakeholders. The study was intended to inform the BSI’s approach towards developing a standards strategy in relation to DLT/Blockchain. In addition, the BSI will use the research as input to discussions in the context of the ISO technical committee on DLT/Blockchain.

RAND Europe did the following:

The analysis suggests that the opportunities arising from DLT/Blockchain are vast, but there are also a multitude of significant challenges to contend with. From the main challenges and opportunities identified, the research extrapolated a set of priority issues for stakeholders which could potentially be addressed through the development of standards.

Prospective role of standards in relation to DLT/Blockchain

The overall consensus based on available evidence and insights provided by key stakeholders was that standards in different areas could play an important role – to varying degrees – in supporting the growth of DLT/Blockchain. However, views differed on the specific areas for potential standardisation and the timelines for developing and implementing the standards. Several areas for action are highlighted in the study regarding the potential role of standards. Rather than providing a definitive list, the study aims to provoke further discussion across stakeholders with an interest in DLT/Blockchain about the potential role of standards in supporting the development and adoption of the technology.

The following graphic is a summary visualisation of the above findings. Click to view a larger image.