Oversight of emerging science and technology: Learning from past and present efforts around the world 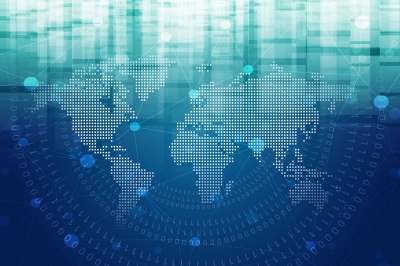 The lessons include the need for the oversight process to be balanced, diverse and contextual, anticipatory, adaptable, and collaborative. Oversight efforts should also take initiative, embrace communication, and engage with the public.

Emerging developments in science and technology can be applied in different ways across sectors and services. Many countries, including the UK, regard advances in science and technology as a key factor for delivering benefits to society and the economy. However, there are many complex challenges, which include public concerns and perceptions about new scientific techniques or technology, as well as health, safety and environmental risks that may be associated with new developments.

The difficulty is to establish a managing structure that capitalises on the benefits and opportunities offered by emerging science and technology while safeguarding the health and safety of people and minimising risks. This process of stewardship, to guide the development of new science or technology over time, is known as ‘oversight’.

The aim of this study commissioned by Wellcome was to examine the oversight of emerging science and technology in historical and current cases spanning different countries, sectors and time periods, and extract common themes and lessons. For this study, a holistic interpretation of oversight was used that broadly included methods that stimulate the development of science and technology, and business arising from them, while protecting the interests of citizens. Science and technology oversight can take place through a range of mechanisms, including formal legislation, regulations, governance, non-regulatory standards and guidelines, as well as other informal elements like public engagement, agreements and international co-operation.

To get a balanced understanding of the effectiveness of the different oversight examples analysed, the study focused both on what worked well and not so well in the context of the oversight.

The research is part of a wider project by Wellcome to identify steps that could be taken to position the UK as a global leader in the effective, efficient and ethical oversight of emerging science and technology.

Researchers developed a series of 10 historical and current case studies, from diverse geographical contexts, sectors, and science and technology areas, to explore the effectiveness of different oversight methods and identify key lessons. The evidence was gathered using a mixed-methods approach designed to analyse existing knowledge and understanding on the current and historical landscape of emerging science and technology oversight. The case studies were selected by carrying out a crowdsourcing exercise with stakeholders across the world and online searches. The evidence for the case studies was obtained via a tailored rapid evidence assessment of existing literature, and insights from a series of key informant interviews. The findings were then brought together in a workshop to analyse the evidence and identify common themes and lessons.

The Cartagena Protocol on Biosafety

The growing use of genetically modified organisms (GMOs) during the 1990s, particularly in the area of agricultural biotechnology, brought with it growing public concern around the possible environmental and human health risks associated with GMOs. This particularly was seen in developing countries that were not yet participating in GMO trade and were concerned about the risks of entry of GMOs into their countries without their knowledge. To address these concerns, the 2003 Cartagena Protocol on Biosafety was developed as a legally binding international agreement to govern the movement of genetically modified organisms across borders.

E-government and digital society in Estonia

From the mid-1990s onwards, Estonia emerged as an early promoter of both e-government and wider digital society related activities. The government of Estonia took measures to support the integration of information and communications technology (ICT) into government services and lay the foundations for a digital society more broadly. Its oversight comprised wide-ranging mechanisms (and collaboration with private sector stakeholders), including: strategic policy documents; legislation; tax incentives; standardisation; technological infrastructure and capacity building; and educational programmes designed to build ICT skills.

Fintech regulatory sandboxes in the UK and beyond

The emergence of new, and potentially disruptive, financial technologies generates opportunities but also brings new risks, both for banking systems and for consumers. Borrowing from ‘sandbox’ approaches deployed in other contexts, the UK Financial Conduct Authority (FCA) in 2015 developed the concept of a fintech ‘regulatory sandbox’; a regulatory ‘safe space’ in which eligible firms can carry out limited tests on innovative fintech products while being exempt from certain regulatory requirements. The concept has proved popular with other governments, particularly in the Asia-Pacific region.

By the late 1950s, international agricultural research institutes had developed new High Yielding Varieties (or HYVs) of grain and wheat capable of being grown on a vast scale in a range of environments. Combined with a package of other agricultural innovations – including fertilizers, pesticides, and irrigation methods – HYVs promised a significantly higher agricultural yield than most ‘traditional’ crops. From the mid-1960s onwards, together with international stakeholders, the government of India built an extensive public infrastructure focused on the promotion of these new agricultural technologies.

The M-Pesa service, delivered by the Kenyan mobile network operator, Safaricom, and the telecommunications company, Vodacom, in 2007, pioneered the use of mobile phones to extend basic banking services to populations previously without access. The development of M-Pesa prompted efforts by the Central Bank of Kenya to create an enabling environment for the growth of the service. The bank worked closely with the service developers and citizens to aid the expansion of branchless mobile banking, while also trying to limit the potential financial risks associated with the technology.

From the late 1990s onwards, European countries began to promote digitalisation in healthcare systems. As part of this agenda, the digitalisation of patient data had the potential to dramatically improve the healthcare provision and the analysis of healthcare systems. Against this backdrop, from 2003 onwards, Danish General Practitioners (GPs) worked together with regional health authorities to develop a system that would automatically and continually capture and store the data collected by the ICT systems used by GPs.

The Global System for Mobile Communication

Digital mobile cellular technology was the second generation of mobile communications technology (2G), following and largely replacing first generation analogue systems (1G). By the early 1980s, most Western European countries had 1G cellular networks in place. The fragmentation and lack of standardisation that characterised these networks, however, stood as a barrier to the successful implementation of 2G. Between 1982 and 1987, the European Union, national governments and private stakeholders worked together to develop a pan-European standard for 2G cellular networks – the Global System for Mobile Communications (GSM).

The NIH Recombinant DNA Advisory Committee in the United States

Recombinant DNA (rDNA) technology began to emerge in the late 1960s with the development of techniques to splice DNA molecules. Recombinant DNA technology offered a range of possibilities for molecular biological research, including gene therapy and genetic modifications. Recognising both the potential applications of rDNA, but also its multifaceted risks, the scientific community sought to develop forums in which the uses of rDNA could be discussed. In the United States, these efforts led to the formation, in 1973, of the National Institutes of Health (NIH) Recombinant DNA Advisory Committee.

The Human Fertilisation and Embryology Act in the UK

Responding to public and parliamentary concerns regarding the legal, social and ethical issues associated with developments in human fertility research and treatment, in 1990, the UK adopted the Human Fertilisation and Embryology Act. The Act regulated the licensing of clinics to ensure patient protection and established measures enabling scientific research to progress in a responsible manner. A key component was the creation of an independent regulatory body – the Human Fertilisation and Embryology Authority (HFEA) – to oversee assisted reproductive technologies.

The first cryptowar: Public key cryptography in the United States

The invention of ‘public key cryptography’, in the mid-1970s, enabled two individuals to exchange encrypted messages between them. It therefore made it possible to incorporate complex encryption into everyday communication formats, such as phone and email-based networks, as these markets began to grow. Concerned about the impact of public encryption on their ability to monitor communications, agencies of the US government sought to restrict public access to this technology. From the early 1990s onwards, they pushed programmes that would provide ‘backdoors’ into encryption systems. Meanwhile, a broad coalition of non-state actors – including cryptographers, privacy advocates and industrial interests – fought against the government’s agenda. Driven by a range of interests, from the protection of civil liberties to concerns about industrial competitiveness, these groups tried to protect widespread, unmediated access to encryption systems.

Researchers used the information gathered in the case studies to identify a set of common lessons — or guiding principles — for discussion and debate that are wide-ranging enough to be usefully considered in other contexts of emerging science and technology oversight.

As shown in the infographic below, these lessons include the need for the oversight process to be balanced, diverse and contextual, anticipatory, adaptable, collaborative, take the initiative, embrace communication, and engage with the public. 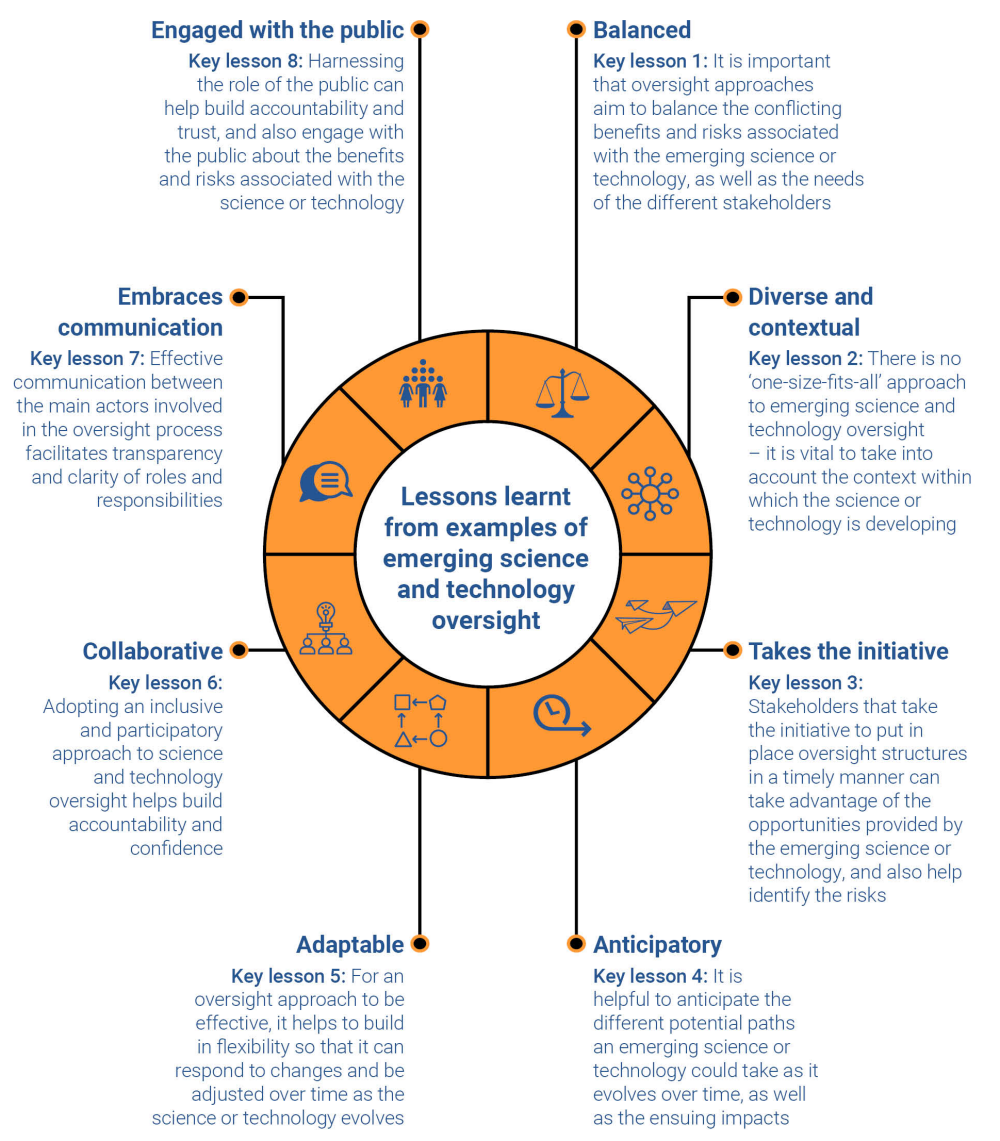 Lessons learnt from examples of emerging science and technology oversight

As illustrated in this study, there are many different ways of designing and managing oversight and they are greatly dependent on contextual factors. A common aim across the different approaches is to enable conditions and structures within which science and technology can be nurtured and developed for the benefit of society. However, oversight is not always effective and there is much that can also be learned from those instances when the wider outcomes of the oversight approach may not have unfolded as originally desired. Developing a better understanding of what has happened in the past can help inform decisions about science and technology oversight in the future. It is hoped this analysis provides some important insights that could potentially be applicable in future contexts.