Employee engagement in the NHS 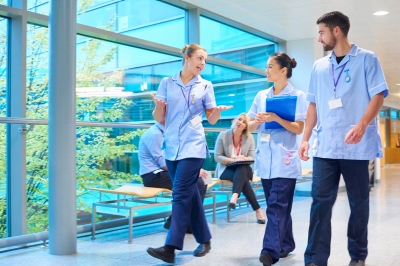 Overall, employee engagement in the NHS is lower than in some UK sectors, such as media and telecommunications and professional services, but better than in others, such as financial services and logistics. It is on par with other large employers with a similar demographic composition among their workforce.

Staff health and wellbeing is an important area for employers. Leading a healthy life, both physically and mentally, helps the individual health of employees, but also benefits employers through boosting productivity in the workplace.

The Five Year Forward View strategy, published by NHS England in 2014, underscores the importance of staff health and wellbeing as a crucial factor in improving the performance of the NHS and chief executive Simon Stevens announced a number of new initiatives and policy developments aimed at improving health and wellbeing within the workforce in 2015.

Staff engagement is seen as being vital for health and wellbeing, with higher levels of engagement associated with lower levels of presenteeism – employees being present at work but working at a sub-optimal level – and absenteeism – employees being absent from work. Both factors have a direct impact on the productivity of the workforce and employers.

RAND Europe conducted an independent study to examine the factors associated with engagement among NHS employees. The report was created as part of a project with the Health Foundation, a charity committed to bringing about better health and healthcare in the UK. Other partners involved in the project are the Work Foundation and the Point of Care Foundation. The study looked at the potential link between organisational, personal and health-related factors and employee engagement, and how engagement is linked with the outcomes at the individual or organisational level. The views expressed in the report are the authors’ own and do not necessarily represent the views of the Health Foundation.

RAND Europe analysed data from the NHS Healthy Workforce Survey, which was conducted in 2016 across 35 UK NHS organisations, and 7,246 employees. In addition, this data was complemented with employer and employee-level information from VitalityHealth’s Britain’s Healthiest Workplace (BHW) survey in 2016, which involved RAND Europe’s analysis of the survey results.