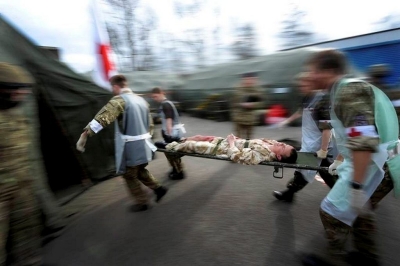 Medical staff with the UK's Army Medical Services rush a mock casualty into a resuscitation suite during a training exercise.

"Light Footprint Operations" (LFO) are a concept under development in relation to EU military led operations. Past EU military operations have been as diverse as mentoring and capacity building in Somalia, providing security during elections in the Democratic Republic of Congo, to providing training in Mali.

Traditional military medical support is designed for larger formations and draws on a heavier supporting infrastructure. Smaller missions could require a different type of support. With the potential for the EU to conduct operations with limited numbers of people, the LFO approach to international missions could become the preferred policy response of both national and international organisations.

In any military operation, the aim of medical support is to meet medical needs and give deployed civilian and military staff the confidence to do their jobs effectively, knowing that they will be looked after. The medical planning challenge for an LFO is that, whilst the population at risk is smaller, the hazards and risk are broader and less specific.

The aim of the study was to identify options for providing effective medical support to LFOs. The research team assessed the appropriate level of support and defined the technology, resources and skill sets necessary to achieve this level of support. The results of the study will predominantly be used to help develop doctrine but will also include practical recommendations.

Other aims of the study included:

The study used both quantitative and qualitative data collection and analysis, including: